The Aryans said they came to Bethany Beach because it is mostly white.

They distributed flyers with membership applications and business cards, and individually talked with members of the audience and media while police officers stood guard nearby.

The Aryans were separated from the public by wooden bike racks.

They lectured on immigration, labor laws and the economy, hoping perhaps, to strike a cord with the audience.  Carol from Ocean View said “they portray themselves as lovers, not haters.”  Her friend Carroll from Millsboro said they attended the rally because they were curious.  She said they did bring out important points of current interest.  But many in the audience expressed skepticism of their motives, and often chanted or booed.

The Aryans brought with them flags and at least one wore a swastika insignia, but they claimed they were not haters.  One Aryan even claimed to be of Jewish ancestry.  They said they have no black members, but love everyone.

Cpl. Rhys Bradshaw, police spokesman, told reporters that “a request was made to use the bandstand by a man in northern Delaware who is the leader of the Delaware chapter of the Aryan Nations.”  They have the right, Cpl. Bradshaw continued, “to come to a public place and express their opinions…. The police department will always protect everybody’s rights.” 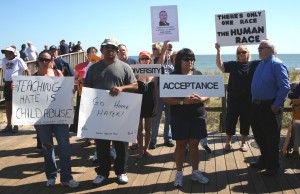 That was one point that most everybody agreed on, that free speech allows speakers on both sides to share their views, no matter how offensive they may be considered.

About 35 officers from a half dozen local and state police agencies helped maintain order during the rally.  Police escorted the Aryans to and from the bandstand, and patted them down for weapons before they entered the limo van.

There were no arrests and no major incidents.

The Aryans vow to return either to Bethany Beach or Ocean City for “White Patriot Day” – this same day – next year. They referred people to the organization’s Website.

Also read what the Anti-Defamation League Website and the FBI Website have to say about the organization.