” … Social Security has not contributed one dime to our current fiscal woes because that money was contributed by America’s workers over decades. … “ 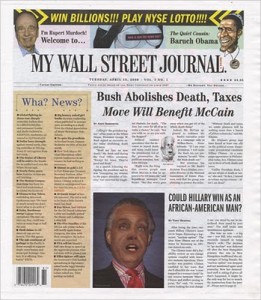 The President’s Fiscal Commission is holding its second pubic meeting today and when commission members say “everything is on the table,” the biggest things they are talking about are Social Security and Medicare.

The commission was created by an Executive Order from President Obama in February after a move to create a commission with much broader powers failed in the Senate. The current commission’s charge is to propose ways to address the nation’s growing debt. The 18-member commission will meet throughout the year and then present its recommendations to Obama after the fall elections. (For more information, visit Social Security Works.)

are spending more than $1 billion dollars to convince the public that slashing these programs [Social Security and Medicare] is the only way to protect our children and grandchildren from poverty.

But while we will see and hear more deficit horror stories from the corporate media and right-wing front groups, Baker says that as they “ramp up their anti-Social Security and Medicare crusade, it is important to remember, it’s just Wall Street propaganda.”

As William Greider recently pointed at The Nation (subscription required):

Here is what the media don’t tell you: Social Security has accumulated a massive surplus–$2.5 trillion now, rising to $4.3 trillion by 2023. This vast wealth was collected over many years from workers under the Federal Insurance Contributions Act (FICA) to pay in advance for baby boom retirements. The money will cover all benefits until the 2040s–unless Congress double-crosses workers by changing the rules.

According to the non-partisan Congressional Budget Office, most of the deficit over the next 10 years will come from the Bush administration’s tax cuts for the rich, the wars in Afghanistan and Iraq, the staggering economy and rising heath care costs –although the new health care reform law is expected to rein much of those costs. Says AFL-CIO President Richard Trumka:

The main driver of the recent increases in deficit projections is worsening economic conditions–in short, the present deficit crisis is largely a symptom of the jobs crisis.

Barbara Kennelly. President of the National Committee to Preserve Social Security and Medicare (NCPSSM), says if the “commission’s goal is to get our nation’s fiscal house in order then its attention should be on programs which contribute to our debt and the revenue reforms necessary to improve the federal balance sheet.”

Unfortunately, too much attention thus far has been focused on using Social Security as the piggybank for fiscal reform.  Let’s be clear about this, Social Security has not contributed one dime to our current fiscal woes because that money was contributed by America’s workers over decades. Cutting benefits under the guise of “fiscal responsibility” is anything but responsible during a time when retirees and near retirees are still suffering the effects of this recession.

Trumka says that when the commission finishes its deliberations in December, “Congress should not merely rubberstamp its recommendations.”

Legislation of the magnitude likely to be proposed should be considered under the regular congressional process… Under no circumstances should deficit alarmists be allowed to circumvent the regular democratic process to advance their long-standing agenda of gutting Medicare and Social Security.

FBI: O'Keefe DID Plan a 'Wiretap Plot' to Secretly Record Employees of U.S. Senator
May 30