Billionaire campaign donor David Koch, heir to a fortune and a political  legacy created by one of the driving forces behind the John Birch Society, makes  no secret of his enthusiasm for Wisconsin Gov. Scott Walker.

“What Scott Walker is doing with the public unions in Wisconsin is critically  important. He’s an impressive guy and he’s very courageous,” Koch explained in a  recent conversation reported by the Palm Beach Post. “If the unions win the  recall, there will be no stopping union power.”

That’s no surprise. What is surprising is that Koch now appears to be  bragging about how he and his brother Charles are using their vast fortune to  fund an independent campaign aimed at “helping”Walker. Even in an era when  billionaires such as the Kochs are emerging as key financiers of super PACs and  other campaign vehicles, Koch’s admission will raise eyebrows — and questions about whether inappropriate coordination by a candidate, his campaign and a  supposedly independent group might be the stuff of“scandal.”

Like their father before them, David Koch and his brother Charles are  longtime champions of extreme right-wing causes. And Walker’s militant  anti-labor policies coupled with a willingness to cut funding for public  education and public services have made him a hero of conservative hardliners  like the Kochs. At the same time, Walker’s extremism has inspired a movement to  recall him from office, which recently filed petitions with more than 1 million signatures calling for an election to remove the governor.

The governor has already spent a fortune trying to block the recall drive,  with millions of dollars in television advertising, as well as expensive legal  efforts to block a new vote. Both have been strikingly unsuccessful so far, at  least in part because Wisconsin has steadily lost jobs since Walker’s budget was  enacted— a dismal record that has caused a loss of confidence in the governor  and his agenda. 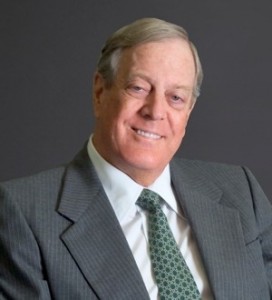 Even as Walker struggles to explain why Wisconsin is shedding jobs while the  rest of the country is gaining them, conservative groups funded by Charles and  David Koch, such as Americans for Prosperity, are filling the state’s television  airwaves with ads that claim Walker’s policies are “working.” According to  Reuters,“a $700,000 advertising campaign sponsored by Americans for Prosperity,  a foundation funded by conservative billionaire brothers Charles and David Koch  of oil and gas conglomerate Koch Industries, hit the Wisconsin airwaves, the  latest phase of its‘Stand with Walker’ campaign.”

These ads are supposedly independent expenditures by a not-for-profit  organization that operates under tax rules established to benefit the work of “religious, educational, charitable, scientific, literary, testing for public  safety, to foster national or international amateur sports competition, or prevention of cruelty to children or animals organizations.”

It’s illegal for “independent” groups operating under the Internal Revenue  Service code as a 501(c)(3) organization, such as the Americans for Prosperity Foundation, to participate  directly or indirectly in any political campaign.

The IRS is explicit in this regard: “Under the Internal Revenue Code, all  section 501(c)(3) organizations are absolutely prohibited from directly or  indirectly participating in, or intervening in, any political campaign on behalf  of (or in opposition to) any candidate for elective public office. Contributions  to political campaign funds or public statements of position (verbal or written) made on behalf of the organization in favor of or in opposition to any  candidate for public office clearly violate the prohibition against political  campaign activity. Violating this prohibition may result in denial or revocation  of tax-exempt status and the imposition of certain excise taxes.”

Similar, though slightly less strict, rules apply to campaigning by other  so-called “501” groups that the Kochs have funded.

So, while David Koch’s stated enthusiasm for Scott Walker was not surprising,  his explanation of how that enthusiasm is being expressed politically was.

According to the Post, Koch said of Walker: “We’re helping him, as we should.  We’ve gotten pretty good at this over the years. We’ve spent a lot of money in  Wisconsin. We’re going to spend more.”

The Post added: “By ‘we’ he says he means Americans for Prosperity, which is  spending about $700,000 on an ‘It’s working’television ad buy in the state.”

Walker’s defenders, a group that now officially includes the Koch brothers  (thanks to David Koch’s pronouncement), will surely suggest that the billionaire  is merely expressing his right to fund independent activities that just happen  to be “helping” Walker.

But it is notable that, during last summer’s Wisconsin state Senate recall  campaigns, the Republican Party of Wisconsin issued statements pointing out that “coordination between … political campaigns and independent groups is  specifically outlawed.”

Such coordination might be denied by the parties involved. But, argued the  Republicans, reasonable people should recognize coordination as a “scandal.”

John Nichols’ new book on protests and politics, “Uprising: How Wisconsin  Renewed the Politics of Protest, From Madison to Wall Street,” has just been  published by Nation Books. Follow John Nichols on Twitter  @NicholsUprising.