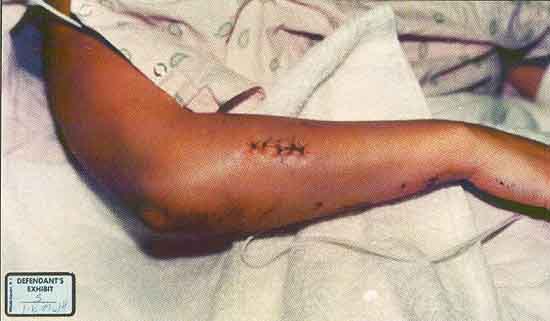 One of the most sensational criminal trials in D.C. history ended Tuesday with the judge acquitting three men of covering up the slaying of Robert Wone -- even though she believes that they know who did it.

D.C. Superior Court Judge Lynn Leibovitz said she thinks that the three defendants made up a story about an intruder breaking in and stabbing the overnight guest at their Northwest Washington home. But in the end, prosecutors had not proved their case, she said, concluding a trial that captivated the region and much of the nation with its most salacious elements: money, class, sex and homicide.

The key to the verdict was the strong distinction between what she might feel in her gut and what was proved beyond a reasonable doubt in her courtroom, the judge said.

"In the ordinary decisions we make in our daily lives, a person who believes something strongly, but without evidentiary support beyond a reasonable doubt, may still be correct in her belief and responsible in her decision-making," Leibovitz said.

"But to convict an accused, a trier of fact must be firmly convinced based on evidentiary certainty."

It took a little more than an hour for Leibovitz to explain her decision after finding Joseph R. Price, 39, Victor J. Zaborsky, 44, and Dylan M. Ward, 40, not guilty of a coverup.

Wone, 32, was stabbed to death Aug. 2, 2006, while he stayed in a guest room at the men's three-story townhouse at 1509 Swann St. NW, near Dupont Circle. The men are in a three-way romantic relationship, which prosecutors saw as cementing their allegiance to each other in the alleged coverup.

Spectators -- including the defendants' parents, who sat in the front row, and members of Wone's family, who sat in the back -- remained silent as Leibovitz explained her position. Some of the half-dozen defense attorneys winked at one another during the judge's remarks as she made points that they believed were in their favor.

When the judge delivered her verdict, Zaborsky cried, but there was no reaction from Ward or Price. Wone's widow, Katherine, who was in the gallery almost every day of the nearly five-week trial, also cried. She was quickly escorted from the courtroom.

Leibovitz was the sole arbiter of the men's guilt because defense attorneys waived the right to a jury trial, fearing that jurors might not be impartial after hearing details of the defendants' relationship. The prosecution consented to the defense's request.

The case is not over, though. Wone's family has a $20 million wrongful-death lawsuit pending against the men. That is a civil case, with different standards of evidence and proof. And it would probably be a jury trial. The next hearing in that case is scheduled for September.

From the beginning, it was a difficult case for the government. Prosecutors acknowledged that they do not know who killed Wone or why, and there was very little physical evidence at the scene. Wone, a prominent lawyer who worked as general counsel for Radio Free Asia, was stabbed three times in the chest and abdomen, and one of the thrusts pierced his heart. He was college friends with Price and had arranged to spend the night at the townhouse rather than commute home to Oakton after working late. Prosecutors initially said Wone had been sexually assaulted.

The three defendants originally were charged with conspiracy, obstruction of justice and tampering with evidence in the guest bedroom, where Wone's body was found, lying on top of the sheets of a pullout sofa. Leibovitz ruled weeks earlier that prosecutors had failed to prove that Zaborsky and Ward had tampered with evidence and acquitted them of that charge.

Prosecutors, led by Glenn L. Kirschner, head of homicide for the U.S. attorney's office, built their case largely around the theory that the knife found next to Wone's body was planted by the men. The real murder weapon, they said, belonged to Ward and was missing from a cutlery set that he kept in his bedroom closet.

Prosecutors also called expert witnesses who said the lack of blood at the scene was unusual for a knife attack, and they argued that the housemates cleaned the scene to cover up the delay between the time they found Wone's body and when they called 911.

Price, a former intellectual-property lawyer for the Arent Fox firm in Washington, was characterized as the lead conspirator. The men have since sold the Swann Street house, and they live together in McLean with a Zaborsky family member. None of the three men testified.

Leibovitz highlighted each of the prosecution theories she said fell short of the beyond-a-reasonable-doubt standard.

She said the government failed to prove that the knife found at the scene wasn't the murder weapon. "It makes little sense that a killer would successfully dispose of a murder weapon only to have his friends create evidence that could actually inculpate both the killer and the people covering up the killing," she said.

Leibovitz agreed with the prosecution that there was no evidence to support the defense theory that an intruder came through an unlocked back door. The judge said there was no evidence that anyone scaled the eight-foot fence that surrounded the back yard and no evidence of anyone entering the house. Leibovitz also said nothing -- including TVs, a computer, and Wone's two wallets and watch -- was stolen the night of the attack.

Still, Leibovitz said, though she doubted the defense theory, prosecutors failed to prove that each of the three men had "sufficient information" about the killing and intentionally manipulated the investigation.

Leibovitz also disputed the government's theory that Wone was killed between 11:10 and 11:49 p.m., when Zaborsky called 911. The men said they called police within a minute or two of discovering Wone's body. Prosecutors said the men delayed about 20 minutes to clean the body and orchestrate a coverup. The judge said there was no evidence to prove what time Wone was killed.

Leibovitz, citing medical expert testimony, also said the lack of blood at the crime scene could be attributed to extensive internal bleeding. The judge said it was likely that Price wiped blood from Wone's body when he discovered his friend and tried to stop the bleeding by applying pressure. But there was no evidence that Price wiped the body to alter or destroy evidence, she said.

The judge cited discrepancies in the statements the housemates made to police and to friends in the hours after Wone's body was found. For example, Price told two friends that he pulled the knife out of Wone's chest, but he told detectives that he moved the knife off his friend's body. Price and Zaborsky gave slightly different accounts as to how Wone's body was positioned and how Price treated the wounds. Leibovitz said the inconsistencies only proved that people seeing the same thing might describe it differently.

Still, Leibovitz wasn't entirely sympathetic to the men. She was obviously disturbed by their demeanor with detectives just hours after Wone was killed. She based her opinion on video interrogations shown during the trial.

She called Price "arrogant," "self-centered" and "dismissive." Zaborsky, she said, was "unmotivated" to help police, and his comments on the 911 call were "eyebrow-raising" and "calculated." She described Ward as "distant" and "detached," which she found unusual, considering that Ward's bedroom was next to the room in which Wone was killed and that he, too, could have been a victim if there had been an intruder.

Leibovitz dismissed the prosecution's theory that Price's younger brother, Michael, killed Wone -- a theory that prosecutors raised during the trial to support the idea that the men were covering for someone they knew.

After the proceedings, the lawyers declined to comment on the judge's views of their clients. Instead, they celebrated the verdict.

Kirschner acknowledged that it was a "challenging investigation and prosecution."