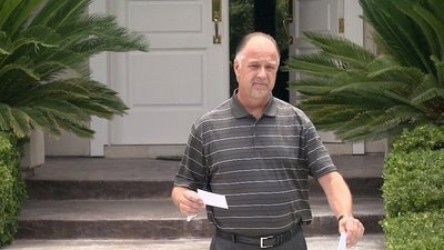 Doug Hampton, husband of Sen. John Ensign’s affair partner, Cynthia Hampton, appears in this KLAS-TV video Wednesday. The Hamptons were both employees of Ensign when the affair reportedly took place, and in a letter to Fox News, Doug Hampton blamed Ensign’s “relentless pursuit of my wife” for their “dismissal.”

In a letter dated five days before Sen. John Ensign’s public confession of an extramarital affair, Doug Hampton pleaded to a national Fox News anchorwoman for help in exposing the senator’s “heinous conduct and pursuit” of Hampton’s wife.

Hours before the Sun obtained an unsigned copy of the letter, Ensign’s spokesman said the senator disclosed the affair with Cynthia Hampton because her husband had approached “a major television news channel before Tuesday,” the day Ensign admitted the affair. “We learned of this fact before the news conference,” the spokesman noted in an e-mail. (UPDATE: Ensign’s office says Hampton made ‘exorbitant demands’)

In his letter, Hampton, a former top administrative aide in Ensign’s Capitol Hill office, said: “The actions of Senator Ensign have ruined our lives and careers and left my family in shambles. We have lost significant income, suffered indescribable pain and emotional suffering. We find ourselves today with an overwhelming loss of relationships, career opportunities and hope for recovery. Our pursuit of justice continues to place me and my family in harm’s way as we fear for our well being.”

Hampton could not be reached for comment, and his Las Vegas lawyer, Daniel Albregts, declined to comment on the letter.

“We are not commenting on any aspect of the case at the present time,” he said.

The letter presented for the first time Doug Hampton’s view of what took place. It was addressed to Megyn Kelly at Fox News’ corporate office in New York. Kelly is the co-host of Fox News Channel’s American Newsroom. She also appears regularly on the O’Reilly Factor with Bill O’Reilly, according to the network’s Web site.

Kelly could not be reached for comment late Thursday.

Reached by e-mail late Thursday, Ensign spokesman Tory Mazzola would not comment on the letter and wouldn’t say whether the senator was aware of it.

So among the key questions that remain unanswered are:

— Did Fox News receive the letter, and if the network did, what did it do with the information?

— How did Ensign learn that Hampton had “approached a major television news channel”?

In the letter, Hampton states that he wanted “to establish the framework for discussion and provide enough information to warrant a meeting with you (Kelly) and Fox News.” He said he had “great respect” for Fox News and was contacting Kelly because she is a lawyer and the story had several legal elements to it. Near the end of the two-page, single-spaced document, he noted: “I could have sought the most liberal, Republican hating media to expose this story, but there are people’s lives at stake and justice is about proper process as well as outcome. Senator Ensign has no business serving in the US Senate anymore!”
Hampton’s timeline of the affair — December 2007 through August 2008 — matches what Ensign and his staff described earlier this week.

“Senator Ensign’s conduct and relentless pursuit of my wife led to our dismissal in April 2008,” Hampton wrote. “I would like to say he stopped his heinous conduct and pursuit upon our leaving, but that was not the case, and his actions did not subside until August of 2008.” Hampton also wrote that he and others had confronted Ensign about his “unethical behavior and immoral choice” on a number of occasions over the past year.

“In fact, one of the confrontations took place in February 2008 at his (Ensign’s) home in Washington D.C. with a group of his peers,” Hampton added. “One of the attendees was Senator Tom Coburn from Oklahoma, as well as several other men who are close to the senator.”

Don Tatro, a spokesman for Oklahoma Republican, said late Thursday that Coburn had no comment.

In his letter, Hampton said he sought Fox News’ help out of desperation.

“It appears there may be nothing the law can do to correct and bring justice and restitution to this terrible wrong that has been done us,” he wrote. “I have sought a number of lawyers who are having difficulty finding charges that may hold up in court.”

Hampton said he understood the story was difficult to believe, but he added that there was a paper trail, phone records and witnesses to corroborate the allegations.

“It is my belief we are dealing with a very powerful person and institution in the U.S. Senate that only the media can pierce to expose the wrong and bring light and focus to what needs to be done.

“Please help me! This should not be how the leadership of our country should be allowed to behave. I need justice, help and restitution for what Senator Ensign has done to me and my family.”

He said he wanted to meet with Kelly and her “team as soon as possible” and would follow up with an e-mail.

Ensign’s sudden acknowledgment of the affair continues to create fallout in the nation’s capital and Nevada. The Ensign-backed Republican Renewal Project — a political action committee in Nevada launched on Ensign’s vision to rejuvenate the state’s Republican Party after Democratic gains — had been scheduled to host a fundraising barbecue Friday. Ensign was to be the featured guest at the dinner, but it has been postponed, according to the Web site.

Ensign remains away from Washington, missing several votes, and is not expected to return until next week.

The Senate is scheduled to resume debate next week on a tourism bill important to Nevada that Ensign co-sponsored with Senate Majority Leader Harry Reid.

The affair with Cynthia Hampton occurred while she, her husband and their adult son were all on the senator’s payroll. She was Ensign’s onetime campaign treasurer and the former treasurer of the senator’s Battle Born Political Action Committee.

Unnamed sources cited in various media reports initially raised the specter of extortion as the reason for Ensign’s news conference, but Metro Police and the FBI said they were not investigating. Ensign’s office on Thursday declined to say today whether the Hamptons sought any money to keep quiet.

Cynthia Hampton’s salary doubled as she took over as treasurer for Ensign’s leadership campaign account until she left in May 2008. Doug Hampton’s final month’s salary as a top aide at the senator’s office was nearly $20,000 — more than his normal pay at the $160,000-a-year-job, although the extra sum could have been for accrued sick or vacation time, or as a stipend.

The couple’s son, Brandon, was also on the payroll with a $1,000-a-month summer job at the National Republican Senatorial Committee in 2008, which Ensign chaired at the time.

The New York Times reported today that after Ensign reconciled with his wife and dismissed Cynthia Hampton, he paid her a severance out of his own pocket.

Ensign’s office has declined to comment on the Hamptons’ salaries, or any severance.

Doug Hampton took a job with Allegiant Air, a Las Vegas company whose CEO is a major Ensign supporter.