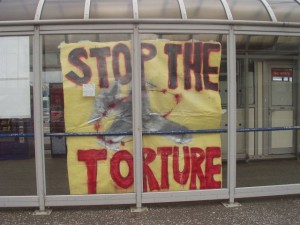 An acute diplomatic crisis broke out between the United States and Sweden in 2006 when Swedish authorities put a stop to CIA rendition flights, according to the latest revelation from Wikileaks.

A few days before the incident US charge d’affaires at the American Emgassy in Stockholm, Steven V. Noble, was summoned by the Swedish Foreign Ministry and questioned about the planned stopover. The Swedish military also set down rules for stopovers.

Steven V. Noble wrote in cables reveled by WkiLeaks that the Swedish government reacted strongly because rules had not been followed.

A spokesperson from Säpo, Swedish police Intelligence Service, confirmed parts the newspaper report, adding that there have been no more extraordinary rendition flights landing in Sweden since.

The U.S. rendition of two Egyptians from Sweden in 2001 was exposed a year later by an investigative TV pogramme and slammed by Swedish officials, international organizations and human rights groups after reports the prisoners were abused.

Ahmed Agiza and Muhammad al-Zery, two Egyptians who had been seeking asylum in Sweden, were arrested by Swedish police in December 2001. They were taken to Bromma airport in Stockholm, had their clothes cut from their bodies, suppositories inserted in their anuses and in diapers, overall, handcuffs and chains put on an executive jet with American registration N379P with a crew of masked men.

They were flown to Egypt, where they were imprisoned, beaten, and tortured according to reports by Swedish investigative pogramme “Kalla fakta”. The Swedish ambassador visited them only six weeks later.

In 2008 AL Zery was awarded 500 000 dollars in damages by the Swedish government for the wrongful treatment he received in Sweden and the subsequent torture in Egypt.