“Witch” is a Euphemism – Christine O’Donnell was a Satanist

" ... O'Donnell did not describe witchcraft at all, at least not the Wiccan variety. She gives witches a bad name. The error would arguably be the same if the Church of Satan's Anton LaVey had described himself as a 'priest.' ... "

The press has, for the past 30 years, permitted itself to be used in a CIA psyop to program the public with the belief that satanism is a mass delusion - of its victims. CIA spychiatrists have even gone so far as to organize a front, the False Memory Syndrome Foundation, to provide the press with a panel of "experts" to claim that small children do not really recall what they think they recall. The smokescreen covers up intelligence cult mind control operations involving pre-schoolers. These operations typically use satanic cults as cut-outs. It's a contradictory media psyop, though - most Americans know that satanism is real, but also "know" that ritually abused children are suffering "false memories." The spreading of confusion and false beliefs has left the public ignorant of the facts, the same is true of many in the press itself, so no one in the establishment media corrected the perky candidate, as they ought, when she claimed to be a "witch" in high school. O'Donnell did not describe witchcraft at all, at least not the Wiccan variety. She gives witches a bad name. The error would arguably be the same if the Church of Satan's Anton LaVey had described himself as a "priest."  O'Donnell admitted to a satanic past, another matter entirely. (I need to point out here that lying is a holy act to a satanist - note the regularity and audacity of her lies, eg. her fatuous claims that she "attended Oxford University" and is "entering the master's program at Princeton." You wouldn't want O'Donnell to take a job at a preschool, let alone high office  ... ) Ignorance is responsible for the misapprehension, an ignorance willfully conceived by the propaganda  press to cover up the heinous crimes of MKULTRA's successors. 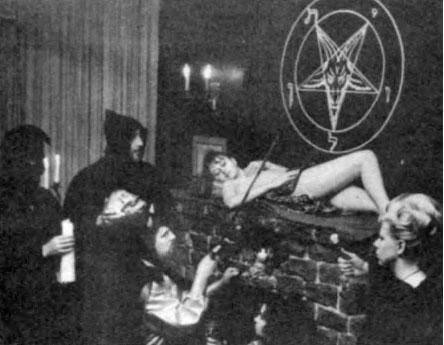 Now that Christine O'Donnell has disavowed her admission on Bill Maher's "Politically Incorrect" talk show in 1999 that she "dabbled into witchcraft" but "never joined a coven," she has inopportunely upset Wiccans. The high priestess of the pagan-promoting Circle Sanctuary, Reverend Selena Fox, accuses O'Donnell of "defaming" Wiccans, telling HuffPo any political candidate who equates witchcraft with Satanism "is ill informed and is not likely to get the support of people involved in nature religion."  O'Donnell, who is running for U.S. Senate in Delaware, probably won't have to worry about losing the Wiccan vote. On the other hand, she may never escape her youthful remarks, which Maher is playing over and over again until O'Donnell returns to his show. "I hung around people who were doing these things," O'Donnell said in 1999. "I’m not making this stuff up. I know what they told me they do ... One of my first dates with a witch was on a satanic altar, and I didn’t know it. I mean, there’s a little blood there and stuff like that ... We went to a movie and then had a little midnight picnic on a satanic altar." http://dscriber.com/politics/2018-christine-odonnells-remarks-about-satanism-peeve-witches.html

This is one of the stupidest, dirtiest, unworthiest websites I have seen in a while. That shame that’s always tickling your calloused consciences, you have earned it.

LaVey called his satanist church members’
witches if female, warlocks if male.
wicca is a recent made up whitewashed confab of the least obnoxious elements of medieval devil worship. The residual pagan elements, generally involve those false gods that even the ancients considered over the top, and pagan Rome and others
put shart limits on the cults of which.

Of course, because it was understood that he meant “satanic witch.” There was no need to define the term. But when he referred to white witches, he had to draw a distinction for clarity’s sake. There are forest witches, there are satanic witches. There are many others. They can all be described as “witches.” My point wasn’t that that all witches are good, or that there are no satanic witches, but that all witches do not have pcinics at bloody altars like the GOP congressional candidate in Delaware. This is why I made the “priest” comparison. There are Catholic priests, there are satanic “priests”. But the word “priest” doesn’t cover it in most situations, is only clear if the context is understood, is imprecise and only ruffles feathers, so I’ve tried to bring some precision to the news stories by distinguising one witch from the other.

If O’Donnell had described herself as a “satanic witch,” she’d have had no argument from me.

In your opinion I was too kind to Wicca, and I might agree with you, but was, as I say, distinguishing between shades of witchcraft. O’Donnell’s comments and reaction from the press could have one believing that wiccans sit down for cheese danishes at bloody altars. You wouldn’t want that. That would be an unnecessary bit of confusion, and it needed to be cleared up, IMhO.

What I want to know: Where did the blood come from that Christine observed at the altar. This has troubled me from the start …

Thank you for making the distinction between white and black magic.

Fundamentalists often refuse to tolerate any drawing of lines in this area, and want a return to the burning times. In a sense, they have been the greatest allies to the FMSF in creating a perception of this research as “witch hunting.”

The reference to “false gods” tells you exactly where Justina is coming from, and I feel her view is skewed by Christian fundamentalism.

I know many occultists of a variety of stripes (including Wiccans) who are far more keen to exposing ritual abuse than the agnostic and monotheistic majorities, whose position is often to turn away from such unpleasantness. For the genuine positive occultist cannot deny the truths of ritual abuse, given the information they encounter in the circles that they run in.

CIA in Paraguay, or How to Get Rid of a President

Covert Operations & the CIA’s Hidden History in the Philippines (2000 U. of Philippines-Manila Lecture)

The Latest CIA Psyop in Venezuela

Media Manipulation and the Indonesian Killings of 1965-66

Psychological Operations (PSYOPS) against Venezuela: Washington and its War on the Bolivarian Revolution