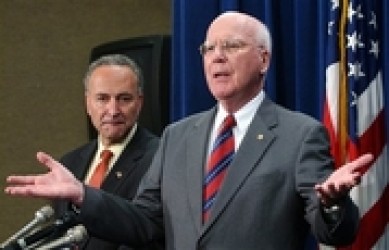 WASHINGTON – The Senate subpoenaed the White House and Vice President Dick Cheney’s office Wednesday, demanding documents and elevating the confrontation with President Bush over the administration’s warrant-free eavesdropping on Americans.

Separately, the Senate Judiciary Committee also is summoning Attorney General Alberto Gonzales to discuss the program and an array of other matters that have cost a half-dozen top Justice Department officials their jobs, committee chairman Patrick Leahy announced.

Leahy, D-Vt., raised questions about previous testimony by one of Bush’s appeals court nominees and said he wouldn’t let such matters pass.

“If there have been lies told to us, we’ll refer it to the Department of Justice and the U.S. attorney for whatever legal action they think is appropriate,” Leahy told reporters. He did just that Wednesday, referring questions about testimony by former White House aide Brett Kavanaugh, who now sits on the U.S. Court of Appeals for the District of Columbia.

The escalation is part of the Democrats’ effort to hold the administration to account for the way it has conducted the war on terrorism since the Sept. 11, 2001, attacks.

The White House contends that its search for would-be terrorists is legal, necessary and effective — pointing out frequently that there have been no further attacks on American soil. Administration officials say they have given classified information — such as details about the eavesdropping program, which is now under court supervision — to the intelligence committees of both houses of Congress. …