Wikipedia: "Cerberus Capital Management, L.P. is one of the largest private equity investment firms in the United States. The firm is based in New York City, and run by 50-year-old financier Steve Feinberg. Former U.S. Vice President Dan Quayle has been a prominent Cerberus spokesperson and runs one of its international units. ... The Gabriel Fund was a feeder fund for Bernard L. Madoff Investment Securities LLC. ... "

Quayle is chairman of the company's Global Investments division. Former Sec. of Defense Donald Rumsfeld was a Cerebus client. Steve Feinberg is a prolific contributor to the Republican Party and other right-wing organizations. 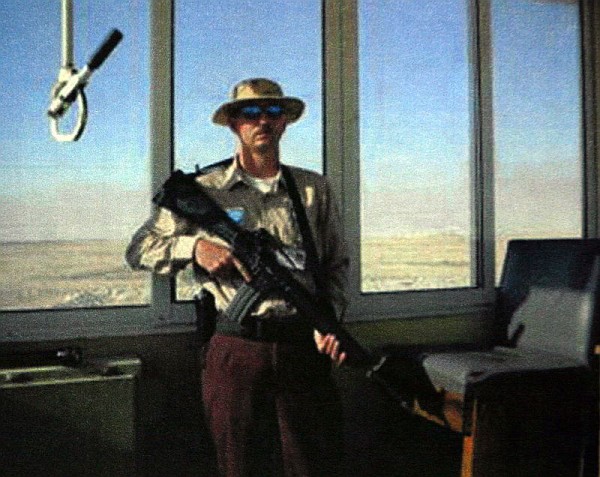 Private investment firm Cerberus Capital Management, LP has reached a $1.5 billion deal to buy the support and security contractor DynCorp International, including the assumption of debt. The purchase price would be $17.55 per share – a 49% premium to the April 9/10 close of $11.75, and 12.4x the FY 2010 consensus forecast of $1.41 earnings per share. A “go shop” provision gives DynCorp 28 days to find a higher and better offer, if it can.. ...

DynCorp’s main financial advisor was Goldman, Sachs & Co. Outside counsel to DynCorp included Schulte Roth & Zabel LLP; plus Richards, Layton & Finger, P.A., who acted as special outside counsel to the Board of Directors.

DynCorp has been a prime beneficiary of the explosive global growth in private security firms, as an adjunct to military operations around the world. The company holds equipment maintenance agreements for vehicles and aircraft, such as the one to service Kuwait’s F/A-18 Hornet fleet. It offers a variety of training programs for foreign police and paramilitary forces, from Afghan and Iraqi police to African Union forces in Somalia. Military support programs include infrastructure contracting under huge multi-award contracts like AFCAP III and LOGCAP IV, and specialty services like foreign linguists, provided through its Global Linguist Solutions LLC (GLS) joint venture with McNeil Technologies.

In recent months, however, the focus on DynCorp has been decidedly negative. The poor performance of Afghanistan’s police forces, and a very critical Inspector General report in January 2010, have placed a bright spotlight on the success of DynCorp’s efforts to train that force, even though the SIGIR report blamed the ineffectiveness of the US State Department as the primary culprit. American commanders have grown increasingly concerned by that performance gap, and awarded a set of contracts to DynCorp’s competitors under multi-award contracts. DynCorp’s response was to protest the awards, on the grounds that the original contract did not cover the counter-insurgency training that American commanders had begun buying, only a broad provision around combating narco-terrorism. In March 2010, the US GAO sustained that protest, and recommended that the Army hold a new competition for the training services it needs. If the Army complies with that recommendation, a contract extension is expected for DynCorp – along with a delay in effectively implementing Afghan theater commanders’ shift in focus.

US GAO (March 15/10) – Decision on Bid Protest by DynCorp International Regarding U.S. Army Contracts in Afghanistan.

Office of the Special Inspector General for Iraq Reconstruction (Jan 25/10) – DOD Obligations and Expenditures of Funds Provided to the Department of State for the Training and Mentoring of the Afghan National Police. “The DOS [State Department] Civilian Police Program contract does not meet DOD [Pentagon]’s needs in developing the ANP [Afghan National Police] to provide security in countering the growing insurgency in Afghanistan,” but the contractor is not faulted.

Ms Sparky (March 31/10) – "Many Dyncorp LOGCAP IV employees disgusted." DID has received similar emails, related to other contracts in other theaters. We cannot verify the accuracy of these reports.

See Multinational Monitor’s december 2002 issue on the ten worst corporations of 2002; dyncorp running cocaine and child trafficking in the hemisphere. The drug trade is what built up the defense contractors into the multinational behemoths they are now. Blackwater/XE systems left for UAE when they faced criminal prosecutions here.