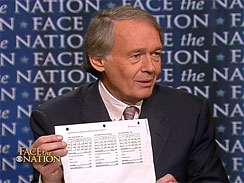 Rep. Bob Markey, D-Mass., said today that BP knew the initial estimates of oil gushing into the Gulf of Mexico from the site of the Deepwater Horizon drilling rig were larger than what they were publicly stating was the flow.

In his appearance on CBS’ Face The Nation Sunday, Markey said that once video of the oil leak became public, independent scientists confirmed that the flow was much higher than the initial estimates made public by the company. Holding what he said was an “internal confidential BP document” attesting to what they believed was the rate of the oil escaping into the sea, Markey told CBS News political consultant John Dickerson that BP “believed in the first week that it was 1,000-14,000 barrels per day. But what they said publicly was that it was 1,000 barrels per day.”

The Democrat, who is chairman of the House Subcommittee on Energy and Environment, said that the amount of oil flowing is tied to any fee that may be imposed on the oil company resulting from the spill.

“BP has a stake in their own liability here,” Market said. “That means that the fine which can be imposed upon them is dependent upon how many barrels per day is going out into the Gulf. If it’s 1,000 barrels per day, it’s a relatively low fine, but if it’s 10,000, 15,000, 20,000 barrels per day, it could wind up billions of dollars in fines that BP executives have to pay to the federal government.” …

When Dickerson asked if BP should be held criminally responsible, Markey said, “Without question the word ‘criminal’ should be used in terms of an environmental crime against our country.”  …