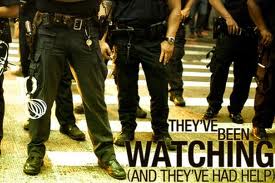 From The Partnership for Civil Justice Fund

In light of the passage of the NDAA yesterday despite last year’s Section 1021 being thrown out by a Federal judge, these documents make it clear that the US government fails the tests of “freedom” and “democracy” that it applies to others as a pretext for “regime change”, and that regime change must therefore begin at home with a recommitment to democracy, freedom and the rule of law. – Sandy Davies – PDA-Miami

FBI documents just obtained by the Partnership for Civil Justice Fund (PCJF) pursuant to the PCJF’s Freedom of Information Act demands reveal that from its inception, the FBI treated the Occupy movement as a potential criminal and terrorist threat even though the agency acknowledges in documents that organizers explicitly called for peaceful protest and did “not condone the use of violence” at occupy protests.

The PCJF has obtained heavily redacted documents showing that FBI offices and agents around the country were in high gear conducting surveillance against the movement even as early as August 2011, a month prior to the establishment of the OWS encampment in Zuccotti Park and other Occupy actions around the country.

“This production, which we believe is just the tip of the iceberg, is a window into the nationwide scope of the FBI’s surveillance, monitoring, and reporting on peaceful protestors organizing with the Occupy movement,” stated Mara Verheyden-Hilliard, Executive Director of the Partnership for Civil Justice Fund (PCJF). “These documents show that the FBI and the Department of Homeland Security are treating protests against the corporate and banking structure of America as potential criminal and terrorist activity. These documents also show these federal agencies functioning as a de facto intelligence arm of Wall Street and Corporate America.”

“The documents are heavily redacted, and it is clear from the production that the FBI is withholding far more material. We are filing an appeal challenging this response and demanding full disclosure to the public of the records of this operation,” stated Heather Benno, staff attorney with the PCJF.

• As early as August 19, 2011, the FBI in New York was meeting with the New York Stock Exchange to discuss the Occupy Wall Street protests that wouldn’t start for another month. By September, prior to the start of the OWS, the FBI was notifying businesses that they might be the focus of an OWS protest.

• The FBI’s Indianapolis division released a “Potential Criminal Activity Alert” on September 15, 2011, even though they acknowledged that no specific protest date had been scheduled in Indiana. The documents show that the Indianapolis division of the FBI was coordinating with “All Indiana State and Local Law Enforcement Agencies,” as well as the “Indiana Intelligence Fusion Center,” the FBI “Directorate of Intelligence” and other national FBI coordinating mechanisms.

• Documents show the spying abuses of the FBI’s “Campus Liaison Program” in which the FBI in Albany and the Syracuse Joint Terrorism Task Force disseminated information to “sixteen (16) different campus police officials,” and then “six (6) additional campus police officials.” Campus officials were in contact with the FBI for information on OWS. A representative of the State University of New York at Oswego contacted the FBI for information on the OWS protests and reported to the FBI on the SUNY-Oswego Occupy encampment made up of students and professors.

• Documents released show coordination between the FBI, Department of Homeland Security and corporate America. They include a report by the Domestic Security Alliance Council (DSAC), described by the federal government as “a strategic partnership between the FBI, the Department of Homeland Security and the private sector,” discussing the OWS protests at the West Coast ports to “raise awareness concerning this type of criminal activity.” The DSAC report shows the nature of secret collaboration between American intelligence agencies and their corporate clients – the document contains a “handling notice” that the information is “meant for use primarily within the corporate security community. Such messages shall not be released in either written or oral form to the media, the general public or other personnel…” (The DSAC document was also obtained by the Northern California ACLU which has sought local FBI surveillance files.)

• Naval Criminal Investigative Services (NCIS) reported to the DSAC on the relationship between OWS and organized labor for the port actions. The NCIS describes itself as “an elite worldwide federal law enforcement organization” whose “mission is to investigate and defeat criminal, terrorist, and foreign intelligence threats to the United States Navy and Marine Corps ashore, afloat and in cyberspace.” The NCIS also assists with the transport of Guantanamo prisoners.

• DSAC issued several tips to its corporate clients on “civil unrest” which it defines as ranging from “small, organized rallies to large-scale demonstrations and rioting.” It advised to dress conservatively, avoid political discussions and “avoid all large gatherings related to civil issues. Even seemingly peaceful rallies can spur violent activity or be met with resistance by security forces. Bystanders may be arrested or harmed by security forces using water cannons, tear gas or other measures to control crowds.”

• The FBI in Anchorage reported from a Joint Terrorism Task Force meeting of November 3, 2011, about Occupy activities in Anchorage.

• A port Facility Security Officer in Anchorage coordinated with the FBI to attend the meeting of protestors and gain intelligence on the planning of the port actions. He was advised to request the presence of an Anchorage Police Department official to also attend the event. The FBI Special Agent told the undercover private operative that he would notify the Joint Terrorism Task Force and that he would provide a point of contact at the Anchorage Police Department.

• The Jacksonville, Florida FBI prepared a Domestic Terrorism briefing on the “spread of the Occupy Wall Street Movement” in October 2011. The intelligence meeting discussed Occupy venues identifying “Daytona, Gainesville and Ocala Resident Agency territories as portions …where some of the highest unemployment rates in Florida continue to exist.”

• The Tampa, Florida FBI “Domestic Terrorism” liaison participated with the Tampa Police Department’s monthly intelligence meeting in which Occupy Lakeland, Occupy Polk County and Occupy St. Petersburg were discussed. They reported on an individual “leading the Occupy Tampa” and plans for travel to Gainesville for a protest planning meeting, as well as on Veterans for Peace plans to protest at MacDill Air Force Base.

• The Federal Reserve in Richmond appears to have had personnel surveilling OWS planning. They were in contact with the FBI in Richmond to “pass on information regarding the movement known as occupy Wall Street.” There were repeated communications “to pass on updates of the events and decisions made during the small rallies and the following information received from the Capital Police Intelligence Unit through JTTF (Joint Terrorism Task Force).”

• The Milwaukee division of the FBI was coordinating with the Ashwaubenon Public Safety division in Green Bay Wisconsin regarding Occupy.

• The Birmingham, AL division of the FBI sent communications to HAZMAT teams regarding the Occupy Wall Street movement.

• The Jackson, Mississippi division of the FBI attended a meeting of the Bank Security Group in Biloxi, MS with multiple private banks and the Biloxi Police Department, in which they discussed an announced protest for “National Bad Bank Sit-In-Day” on December 7, 2011.

• The Denver, CO FBI and its Bank Fraud Working Group met and were briefed on Occupy Wall Street in November 2011. Members of the Working Group include private financial institutions and local area law enforcement.

You can read the FBI – OWS documents here where we have uploaded them in searchable format for public viewing.

The PCJF filed Freedom of Information Act demands with multiple federal law enforcement agencies in the fall of 2011 as the Occupy crackdown began. The FBI initially attempted to limit its search to only one limited record keeping index. Recognizing this as a common tactic used by the FBI to conduct an inadequate search, the PCJF pressed forward demanding searches be performed of the FBI headquarters as well as FBI field offices nationwide.

The PCJF will continue to push for public disclosure of the government’s spy files and will release documents as they are obtained.