Boston Bombings: FBI Agent at Center of Case is Under Investigation for Ties to Mafia Boss Accused of Heroin Dealing & Multiple Murders 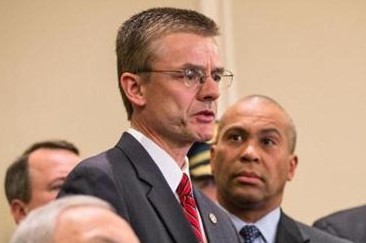 Photo: The FBI’s Richard DesLauriers, who led the local investigation of the Boston Marathon bombings.

In a stunning reprise of Boston’s James “Whitey” Bulger/FBI revelations, the Bureau’s Richard DesLauriers stands accused by state police and a congressman – despite official assurances that the FBI has severed all ties to the Mafia (see second article below) – of a very Bulgerian connection to Mark Rossetti, a local  capo.

Rossetti was, until his arrest by state authorities, an FBI “informant” to DesLauriers, who led the FBI investigation of the Boston Marathon bombings. Rossetti’s crew dealt heroin. And they reportedly killed — while DesLauriers and his agents looked the other way.

The FBI has exonerated itself, claiming that any contact with the mobster ended when his organized crime connections surfaced. But Mark Rossetti has a history of mob-related convictions. And if DesLauriers’ FBI office had obtained evidence that Rossetti was involved in local Mafia activity, why wasn’t he placed under arrest, or at the very least investigated, given the severity of crimes for which he is currently serving a 12-year prison sentence?

Congressman Stephen Lynch (D-Mass., 8th District) told the Boston Globe in August 2012 that the heroin-dealing Mafioso’s relationship with the FBI was “questionable.”

“In my estimation, at least what we’ve seen so far, what Rossetti was doing should have triggered a [halt] in his status as a confidential informant,” Lynch said, contradicting the FBI’s public disavowal. “He should have been brought in, should have been found to be unsuitable, and that’s it.”

Rep. Lynch initiated the probe of Rossetti’s covert tie to DesLauriers and the FBI “after it was exposed last year that the gangster, suspected by State Police of participating in murders, was all along working as an informant.”

The FBI further claims (see second story below) that it cooperated with the state police investigation, but Rep. Lynch again condtradicts the FBI’s self-serving public pronouncements:

“Lynch said he has not made a determination as to the appropriateness of the relationship because the FBI’s internal review has not been completed, but early indications show the relationship was questionable. The congressman said that the FBI already has acknowledged that it failed in communicating with State Police, who were investigating Rossetti, and that the upcoming trials could further detail not only what Rossetti was doing, but what the FBI knew of it.”

Ironically, not only has the Bureau maintained covert Mafia ties and lied about it — shades of J. Edgar Hoover — it is lauded for arresting a terrorist charged with killing four, while the mob boss with FBI oversight is suspected of murdering at least as many.  The Massachusetts State Police Organized Crime Strike Force estimates that Rossetti, while working as an FBI informant, is a suspect in at least 6-20 murders.

The DesLauriers-Rossetti relationship would have never come to light had Rep. Lynch and a state police investigation not exposed it. Only then did Bureau officials openly confess. Past FBI cover-ups of the Rossetti connection render the veracity of an internal investigation doubtful. That should be left to an independent agency.

Meet the FBI agent at the heart of the Boston Marathon bombing investigation:

Richard DesLauriers was one of several law enforcement officials at Fenway Park Saturday afternoon, invited by the Red Sox to honor the officials for their handling of the Boston Marathon bombings and the capture of one of the suspects.

It was the Red Sox’ first home game since the Marathon, and the law enforcement officials were welcomed as heroes. …

In what was perhaps Boston’s most intense week of law enforcement activity, DesLauriers, a Massachusetts native who grew up in Longmeadow, was at the center — his trademark calm and “bookish” personality set the tone for the 100-hour-long investigation: the painstaking analysis of the crime scene, the scouring of countless video and photo images.

He was the local FBI leader during the arrest of reputed gangster James “Whitey” Bulger in 2011. And he announced on the 23d anniversary of the notorious Gardner Museum art heist in March that the FBI has determined the identity of those involved in the theft, and that agents had traced the paintings to Philadelphia, where they may have been as recently as a decade ago.

Despite successes, his office has also faced criticism.

The FBI is conducting an internal investigation — and Congressional inquiries have been made — into a controversial relationship between the agency and Mark Rossetti, a violent Mafia leader and suspected killer who was secretly working for the FBI as an informant, possibly in violation of the agency’s guidelines. …

About Mr. Rossetti and his relationship with DesLauriers’ FBI office:

Mark Rossetti, the once-feared captain of the New England Mafia, appeared before a Suffolk Superior Court judge in jogging pants and handcuffs Friday and was sentenced to 12 years in prison, effectively punctuating a sweeping case that charged him with running a violent criminal enterprise across Eastern Massachusetts.

Rossetti, now 53 and silver-haired, had a controversial secret relationship with the FBI. He had pleaded guilty to usury and extortion, to lending money at exorbitant interest rates to a gambler, and to using threats to collect gambling debts for bookies.

He will serve the sentence concurrently with sentences for recent convictions of selling ­heroin and of breaking and entering to rob a ­rival drug dealer.

With the sentence Friday, the third and final punishment stemming from an indictment in 2010, Rossetti is sure to remain in prison until he is in his 60s, the latest blow to La Cosa ­Nostra in New England.

“Mark Rossetti was the leader of an extensive and violent criminal enterprise that for ­decades threatened the safety of our community,” said Attorney General Martha Coakley, whose office sought indictments of Rossetti and about 30 other Mafia members and associates in October 2010 for running a vast enterprise known as the Rossetti organization.

“This sentence today is an important step in our efforts to combat organized crime,” Coakley said, adding that “Rossetti and many of his asso­ciates have been taken off our streets and are no longer threats to public safety.”

Rossetti, after telling Superior Court Judge Jeffrey A. Locke that he worked in construction and never went past the ninth grade, said he understood the charges and his decision to plead guilty.

His attorney, Michael Doolin, said that his client was glad to resolve the case and “looks forward to putting these ­issues behind him and getting on in his life.”

Rossetti has a history of convictions, for robbing an armored vehicle and having guns, and he once chose to serve jail time rather than testify about organized crime. He had been identified by State Police as a suspect in several murders.

But the indictment of him and his associates in 2010 after an investigation initiated by Essex County authorities and the State Police also helped to expose his secret work for the FBI as a federal informant, a questionable relationship, given his history of crime and his continuing role as a Mafia leader. The FBI had enacted guidelines banning similar relationships in the wake of its corrupt handling of James “Whitey” Bulger.

The FBI said after the relationship with Rossetti was exposed in court records that it had ended its work with the Mafioso once it realized he had been engaging in organized crime and that it assisted with the State Police inquiry.

The bureau has admitted to no wrongdoing and said it is conducting an internal review of the relationship.

Several of Rossetti’s associates sought dismissal of their cases, arguing they could not be convicted for conspiring with Rossetti because he had been a government informant, but their requests were denied.

A recent tally showed that nearly 20 of ­Rossetti’s associates have been convicted and are serving either prison terms or probation for a variety of crimes, including gambling, bookmaking, loansharking, drug dealing, and extortion

Assistant Attorney General Dean Mazzone had asked Locke for the 12-year prison sentence for Rossetti, citing his history as a Mafia leader.

“His record is a horrendous one,” Mazzone said. “The defendant was a capo in the Boston area Mafia. He directed various crimes over the course of several years.”