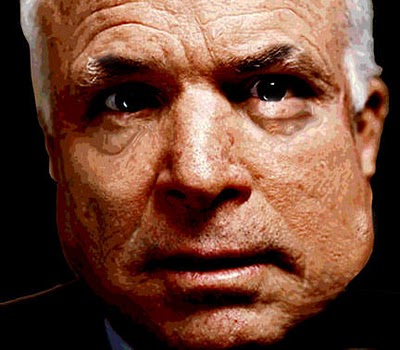 ‘I uncovered a lot of stuff I can’t put in the book,’ author says.

By Nick Juliano
April 8, 2008
Picked up from the Raw site

John McCain’s campaign is lashing out at a shocking new report (first revealed here on Monday) of his red-faced, expletive-laden tirade aimed at his wife. Meanwhile, the Huffington Post reveals another nugget from Cliff Schecter’s new book The Real McCain, which details a physical confrontation between McCain and another congressman.

Perhaps the most remarkable story of McCain’s temper involved Arizona Congressman Rick Renzi. Two former reporters covering McCain, one who witnessed the following events and one who confirmed the facts provided by the first, relayed it to me as follows: In 2006, the Arizona Republican congressional delegation had a strategy meeting. McCain repeatedly addressed two new members, congressmen Trent Franks and Rick Renzi, as ‘boy.’ Finally, Renzi, a former college linebacker, rose from his chair and said to McCain, “You call me that one more time and I’ll kick your old ass.”

McCain lunged at Renzi, punches were thrown, and the two had to be physically separated. After they went to their separate offices, McCain called Renzi and demanded an apology. Renzi refused. Apparently this posture made McCain admire him, as they became fast friends.

Also included in the book is an anecdote from a 1992 campaign stop, relayed to the author by three sources. McCain’s wife Cindy teased him about this thinning hair at which point he lashed out, “At least I don’t plaster on the makeup like a trollop, you cunt.”

RAW STORY called McCain’s campaign for comment before revealing the anecdote Monday morning. No one ever called back, but the campaign has seen fit to decry Schecter’s reporting in an interview with a New York gossip column.

The campaign has not yet weighed in on the report of his scuffle with Renzi.
Schecter responded to the accusation on his blog.

No surprise here. It’s far from the first time the “maverick” has made himself into a liar, and today’s opening statement to General Petaeus once again showed it won’t be the last. …

I have hit McCain with a bit of that old straight-talk. Instead of lying about me because of it, he should try it sometime. How about starting today when we are trying to find a solution to this disaster he helped create in Mesopotamia.

Huffington Post reporter Sam Stein notes that the book’s new reports on McCains fiery temper are well supported by other accounts of his losing his cool.

Anecdotes like these would stand out as highly abnormal if it weren’t for McCain’s history of similarly explosive behavior. As Washingtonian magazine documented (and Schecter notes in the book), McCain once “scuffled” with the Senate’s then oldest member, Strom Thurmond, during a Senate Armed Service Committee hearing in January 1995. Three years later, the Associated Press article reported that McCain dropped F-Bombs on at least three fellow Republicans.

“I’m calling you a f—— jerk!” he once retorted to Iowa Sen. Chuck Grassley.

And in a opinion piece last year on Salon.com, Sidney Blumenthal, now an adviser to Sen. Hillary Clinton, wrote that McCain once told Sen. Ted Kennedy to “shut up” on the Senate Floor, referred to a fellow Republican as a “shit head” and offered a downright vicious and doubly-offensive joke in 1998 Republican fundraiser about then first daughter Chelsea Clinton.

“Do you know why Chelsea Clinton is so ugly?” he asked. “Because Janet Reno is her father.”

The anecdote in The Real McCain about the candidate’s tirade towards his wife was confirmed to Schecter by three Arizona reporters, who had been covering the candidate at the time. He told RAW STORY Monday he was fully confident in the story’s accuracy and wouldn’t have included it otherwise.

“I uncovered a lot of stuff that I cannot put in the book,” he said.