Books on the Right 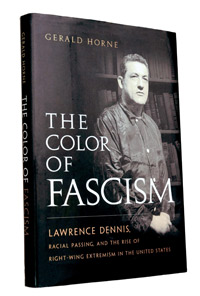 A bumper crop of works on influential early 20th century American racists, fascists and eugenicists has been hitting the bookshelves in 2009. Two of the most interesting are on Madison Grant (1865-1937), perhaps the most important conservationist of his time and so pernicious a racist and anti-Semite that he helped inspire Hitler’s policies, and Lawrence Dennis (1893-1977), the biggest defender of fascism in the 1930s, who was, surprisingly, a black man passing for white.

Jonathan Peter Spiro’s biography of Grant, a very rich member of the American WASP elite, is eye opening. It is astonishing to realize how many major American figures of the early 1900s were so rabidly racist and anti-Semitic — and perfectly willing to use the power of the state to sterilize those they saw as lesser beings. Spiro’s book is fundamental to understanding how profoundly our nation has been shaped by racist and anti-Semitic ideas.

Grant was a member of Theodore Roosevelt’s Boone and Crockett Club, an exclusive organization focused originally on big game hunting, and later big game protection, that included a few hundred of the 26th president’s closest friends. A celebrated fixture in New York’s prestigious private clubs, Grant was also the founder of several important institutions, including the Bronx Zoo.

From his perch in high society, Grant relentlessly advocated in favor of conservation, and he is largely responsible for saving California’s redwoods as well as creating several of what are now prized national parks, including Glacier National Park in Montana. The world’s tallest tree, a redwood, was named after Grant in 1931. But his central role as an early environmentalist has been obscured by his other, more odious legacy: Grant was the greatest propagandist of racism, anti-Semitism and eugenics of his time, and his ideas greatly influenced American elite opinion and profoundly affected the nation’s history.

Grant’s most important work, The Passing of the Great Race, was first published in 1916 by the elite Charles Scribner’s Sons. Its basic thesis, still popular among American white supremacists today, is that miscegenation and immigration were destroying America’s superior “Nordic” race. In their time, Grant’s beliefs were popular, even meriting a mention in F. Scott Fitzgerald’s The Great Gatsby (the celebrated author and Grant shared the same Scribner editor).

Presaging Hitler’s infamous words, Grant called Nordics “the Master Race.” To protect that race, Grant was quite clear that restrictions curtailing Jewish and Southern European immigration were necessary. Eugenics, too, were required. He wrote that the effort should begin by sterilizing the “criminals,” the “insane” and the “diseased,” followed by the “weaklings” and, ultimately, all “worthless race types.”

Grant’s ideas had momentous consequences, becoming commonplace among the American elite and resulting in concrete political change. From behind the scenes, Grant nearly single-handedly orchestrated passage of the racist 1924 Immigration Act. That bill, which remained in place until 1965, drastically cut immigration levels, excluded Asians, and largely restricted entry to Northern Europeans.

Through eugenics organizations he funded and founded, Grant influenced many states to pass coercive sterilization statutes under which tens of thousands of Americans deemed subpar were sterilized from the 1930s to the 1970s. Grant’s ideas became the accepted law of the land in 1927, when the Supreme Court upheld sterilization laws and Justice Oliver Wendell Holmes endorsed them, writing that “it is better for all the world if, instead of … let[ting] them starve for their imbecility, society can prevent those who are manifestly unfit from continuing their kind.”

It is undeniable that the Nazi genocide was based at least in part on these ideas. The theorists of the Third Reich read Grant’s work and Hitler cited it in Mein Kampf. Holmes’ opinion and Grant’s book were both entered as evidence for the Nazi defense during the Nuremberg trials.

Another striking aspect of Spiro’s book is the parallel between the lives of Grant and John Tanton, the founder of the modern nativist movement. Like Grant, Tanton has founded dozens of organizations. Like Grant’s, Tanton has a long history of environmental activism. And like Grant, Tanton’s efforts were backed by the Pioneer Fund, a long-time supporter of eugenics whose leaders were close to Grant. Indeed, Tanton’s personal hero, John Trevor Sr., was a close friend of Grant’s who was another key player in passing the 1924 act and openly promulgated racist and anti-Semitic views. (Trevor distributed pro-Nazi propaganda, drew up plans to crush uprisings of “Jewish subversives,” and warned shrilly of “diabolical Jewish control” of America.)

Gerald Horne’s The Color of Fascism is a much slimmer volume on the unlikely career as an American fascist of Lawrence Dennis, a far-right thinker who passed as white and whose ideas are still prized today by radical right activists, including veteran anti-Semite Willis Carto.

Dennis was an interesting character. He was born in Atlanta of a black mother and white father in 1893 and was a child prodigy. Before the age of 10, Dennis wrote a book on his Christian beliefs and preached his religion to massive crowds in the U.S. and Europe — never hiding his black mother, who shepherded him around the world. But as he grew older, the light-skinned Dennis made a decision to leave his far darker-skinned mother behind and to begin to pass for white. By the 1920s, he had achieved the unthinkable for a black man of the time, graduating from Exeter and then Harvard and going on to make careers for himself in the State Department and on Wall Street, where he was one of the few who predicted the 1929 stock market crash. That prediction led to a profitable run of speaking engagements for Dennis in the 1930s and vaulted him into the upper-class social circles of the far right, where he became particularly close to Charles and Anne Lindbergh.

By the 1930s, Dennis had evolved into the public face of American fascism, making connections with American extremists and traveling to Europe to meet with Mussolini, whom he later said he was “less impressed with” than Hitler. In 1941, Dennis was named “America’s No. 1 Intellectual Fascist” by Life.

What made Dennis an adherent of an ideology that most certainly would have oppressed him and other African Americans? Horne theorizes that Dennis may well have been attracted to fascism simply because it stood starkly opposed to American “democracy” which then so openly oppressed blacks living under Jim Crow. He wrote often and eloquently of the impending ascendancy of the fascist model, and regularly ascribed America’s decay to its racist policies — a point that oddly seemed missed by his many racist allies.

Dennis’s fascist run ended disastrously. In the fraught years leading up to World War II, the FBI investigated Dennis’ fascist contacts and was told by a former girlfriend that he frequented Nazi events. In 1944, Dennis was tried for sedition, along with a bevy of co-defendants whom he would claim little connection to, after being charged with orchestrating “a three-year plot to incite mutiny in the armed forces, unseat the government and set up a Nazi regime.” The trial was widely criticized as an incoherent farce and ended in a mistrial after the judge suffered a fatal heart attack. Regardless, Dennis’ reputation was destroyed.

Not everyone abandoned Dennis in the wake of the trial. He remained close in the post-war years to Senator Burton K. Wheeler (D-Mont.), America Firster and retired Gen. Robert Wood, conservative publisher William Henry Regnery and “historian” Harry Elmer Barnes, whose Holocaust denial is popular in anti-Semitic circles to this day. But for the most part, Dennis was shunned, dying in obscurity in 1977, decades after fascism had been totally discredited as a political system.