Attorneygate/The Hidden Core of the Scandal 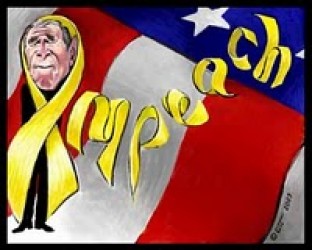 AC Note: The firings were a symptom – the actual “disease” was the GOP takeover of the Justice Department with the intent of deploying it as a covert political instrument, to make the department – with all of its resources and sub-divisions – a branch office of the RNC.

The congressional investigation is trying to get there, but the Bush administration’s foot-dragging impedes exposure of the overriding Republican scandal. It’s not merely the Bushites who fear the investigation – the RNC will eventually be pulled into the headlines and the plot exposed if establishment reporters dig a little.
———–
Bush Denies Congress Access to Aides
July 9, 2007
By LAURIE KELLMAN

It was the second time in as many weeks that Bush had cited executive privilege in resisting Congress’ investigation into the firings of U.S. attorneys.

White House Counsel Fred Fielding insisted that Bush was acting in good faith in withholding documents and directing the two aides – Fielding’s predecessor, Harriet Miers, and Bush’s former political director, Sara Taylor – to defy subpoenas ordering them to explain their roles in the firings over the winter.

In the standoff between branches of government, Fielding renewed the White House offer to let Miers, Taylor and other administration officials meet with congressional investigators off the record and with no transcript. He declined to explain anew the legal underpinnings of the privilege claim as the chairmen of the House and Senate judiciary committees had directed.

Fielding has called the Congress demand “unreasonable”.
The White House has told Congress it would not comply with its demand for access to the documents concerning the fired prosecutors’ case.

WASHINGTON — A senior Justice Department official who helped carry out the dismissals of federal prosecutors said Friday he is resigning. Mike Elston, chief of staff to Deputy Attorney General Paul McNulty, is the fifth Justice official to leave after being linked to the dismissals of the prosecutors.

Elston was accused of threatening at least four of the eight fired U.S. attorneys to keep quiet about their ousters. In a statement Friday, the Justice Department said Elston was leaving voluntarily to take a job with an unnamed Washington-area law firm.

The firings have led to congressional investigations, an internal Justice Department inquiry and calls on Capitol Hill for the resignation of Attorney General Alberto Gonzales.

Reached Friday afternoon, Elston confirmed his plans to leave but declined further comment. His departure is effective at the end of next week and was widely anticipated since McNulty announced his own resignation last month.

In a statement, McNulty said Elston served the Justice Department “with distinction for nearly eight years.”

“With his breadth of trial and appellate service, I have no doubt he will continue to enjoy an outstanding legal career,” McNulty said.