" ... Yes I'm a political operative. Like you, I am deeply concerned about the direction our left-wing adversaries are taking this country. Our freedoms and values are under assault. ... " - Ann Wagner's videotaped announcement of her candidacy for the RNC chair 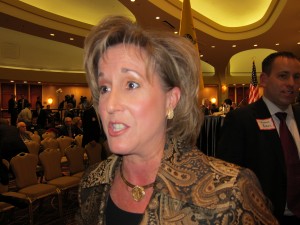 WASHINGTON -- Even more than in political campaigns, the election for national party chairman depends on the influential people in your corner.

So candidates for chairman of the Republican National Committee are busy lining up endorsements, and St. Louis's entry, Ann Wagner, added one today in conservative luminary Phyllis Schlafly.

Schlafly, reflecting widespread discontent with current RNC head Michael Steele, said in a statement that the Republicans "desperately need new, effective and capable leadership ... She (Wagner) has all of the tools and experience required to lead the Republican National Committee."

Schlafly, 86, of St. Louis, is the founder of Eagle Forum and a mainstay for decades in the conservative movement. ... CONTINUED