GOP Watch » An Omen by the Name of Phyllis Schlafly

" ... The problem is not so much Schlafly as it is the veneer of ill-deserved respectability that cloaks her activism. . ... Schlafly’s long-stated positions have always placed her more comfortably along side the likes of John Birch Society founder Robert Welch — whose organization Schlafly belonged to in the late 1960s — and swift boat-smears purveyor Jerome Corsi. ... " 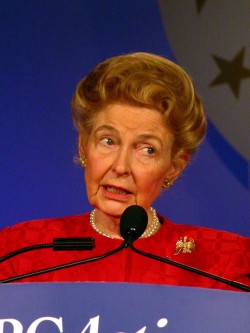 Sharron Angle, staunch opponent of the fluoridation of the American water supply, has a clear path to victory in the Nevada senate race against unpopular majority leader Harry Reid. Joining her in the world’s greatest deliberative body may be Christine O’Donnell, who has accused President Clinton of orchestrating the murder of Vince Foster, has admitted to practicing witchcraft and has publicly asked why, if Darwinian evolution is scientific reality, she has yet to see a monkey evolve into a Homo sapiens before her eyes.

Truly, this is the year to be celebrating to ascendancy of the conservative woman. Luckily, the political action group Citizens United — yes, that Citizens United group, which recently prevailed against the Federal Election Committee in a high profile Supreme Court decision — is doing just that. Their most recent show of support includes a video that compares President Obama to mobsters while featuring an unedited, uncritiqued clip of a tea partier calling him — in what I’m sure was not meant to be racially motivated — a “gangsta."

That, however, is far from the most offensive thing about this line of reasoning. No, that honor would go to the extensive call-outs in the video lauding the career and accomplishments of conservative activist Phyllis Schlafly, alongside the likes of former British prime minister Margaret Thatcher.

At a late July fundraiser and again during an interview with Talking Points Memo, Schlafly sent Democratic activists hurtling toward their moral indignation machines. Calling out the nation’s unmarried women, Schlafly attempted to explain their overwhelming support of President Obama during the 2008 election with words recorded by Kathleen Gray of the Detroit Free Press:

“Do you know what the second-biggest demographic group that voted for Obama — obviously the blacks were the biggest demographic group. But do you all know what wass the second-biggest? Unmarried women. 70 percent of unmarried women voted for Obama, and this is because when you kick your husband out, you’ve got to have big brother government to be your provider.”

Learning a thing or two after years of being bullied by FOX News, Democrats demanded that the 75 Republican candidates who have received funds and support from Schlafly’s Eagle Forum publicly distance themselves. While efforts such as these are usually an indicator of campaigns entering silly season, this line of attack may have some resonance in races such as the contest for David Vitter’s Louisiana Senate seat, given that candidates litany of problems regarding women’s issues.

Angle, already facing perceptions that she lacks message control and is a touch on the crazy side, is another who doesn’t need the added grief of trying to explain away Schlafly. The same goes for Scott Brown, who has been accumulating a number of connections that may not sit well with Massachusetts voters in a couple years when he’s up for re-election.

Noxious behavior from Schlafly, however, is hardly a departure from the norm. Schlafly’s true moment in the sun came from her stint in the 1970s as “the most visible and effective critic” of the Equal Rights Amendment.

But her political roots are considerably more outside the pale — in her first turn on the national stage as a delegate to the 1960 Republican National Convention, Schlafly led a revolt of self-described “moral conservatives” following candidate Richard Nixon’s embrace of more stringent language supporting civil rights in the party platform. 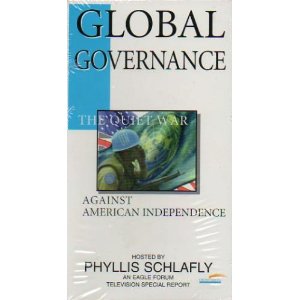 Schlafly’s long-stated positions have always placed her more comfortably along side the likes of John Birch Society founder Robert Welch — whose organization Schlafly belonged to in the late 1960s — and swift boat-smears purveyor Jerome Corsi, with whom she has created a website in opposition to the fanciful “North American Union.”

The problem is not so much Schlafly as it is the veneer of ill-deserved respectability that cloaks her activism. The popular memory of Schlafly is now such that her inclusion on a list of figures set to be lionized by Texas’ much-maligned textbook revisions merits barely a batted eye from national and local media.

But why be surprised? Search for books on Sen. Joseph McCarthy on Amazon, and you will find more sympathetic volumes than have ever been in circulation. Elena Kagan was confirmed easily by the Senate before it quit for recess in August, but not before it was made abundantly clear that Thurgood Marshall would no longer have a chance.

Democrats can’t be blamed for jumping on Schlafly’s incendiary remarks — given recent estimates that control of Congress may very well shift, they need to be grasping at whatever straws are within reach. But the fact that she is even enough of a part of the national conversation to merit such treatment speaks volumes concerning the trajectory of American politics over the past quarter century and highlights the environmental handicaps Obama faces in attempting to govern progressively and shift the national discourse away from the far right.

The fact that mainstream conservatives see no potential drawbacks to embracing the reaction, anti-intellectualism and vitriol she stands for says even more regarding the virtues of those who have made the most public to-do concerning their sense of disaffection by the Obama presidency.

Editor in Chief Asher Smith is a College senior from Great Neck, N.Y. The above views do not represent the opinions of the Emory Wheel.