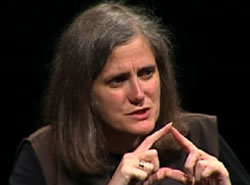 In case you were still wondering, Amy Goodman is not credible.

CIA-journalist followers are used to taking spoon-fed information and this has turned them into credulous dupes.

The funny thing is, they don’t know it. An animal that runs in herds doesn’t think about where it is led. It follows without question. So do the listeners of Democracy Now!

Tthis brick wall of words should have graffiti painted over it in bold red letters: Robert Jay Lifton is Responsible for Much of the Illicit MKULTRA Experimentation Conducted by the CIA – a Scaife-Funded Torturer Highly Praised by Amy Goodman

This is a particularly offensive act by Amy.

She is an unabashed fan of Dr. Robert Jay Lifton, who is passed off on Democracy Now! as a concerned establishment liberal of some kind, his paper-thin CIA cover story. Dr. Lifton is in fact a guiding light of the far-right, Mockingbird Scaife-funded American Family Foundation, a CIA front. Confused? This far-right-left-wing-CIA-anti-CIA doctor isn’t confused politically. He’s a manager of perceptions. Suspend disbelief for a moment and the contradictions aren’t so glaring. Amy Goodman takes him at his word. Research his past, dig a little (a few minutes on the Internet), and you will find that Lifton is responsible for thousands of atrocities committed against hapless American citizens, tortured in unconscionable CIA mind control experiments initiated by Lifton himself as a founder of the Human Ecology Fund.

The Fund disbursed grants for classified experimentation code-named MKULTRA, an ambitious program that explored the uses of electric shock, LSD, bio-electronics, torture, depatterning (the desctruction of the mind in order to rebuild it), “coercive persuasion” and other forms of mind control atrocity in the 1950s and early ’60s.

And that takes some doing.

His famous study, The Nazi Doctors, was written for the CIA. It is, viewed one way, a prescription for CREATING Nazi doctors. It fails to name names.

From the Democracy Now! people, however, we learn none of this. And that is especially galling – Goodman is intentionally keeping the truth from her listeners.

Lifton is PRAISED: “Robert Jay Lifton, distinguished Professor of Psychology and Psychiatry at John Jay College and the Graduate Center of the City University of New York as well as a visiting psychiatry professor at Harvard Medical School. He is also the author of several books. His latest book is Superpower Syndrome: America’s Apocalyptic Confrontation with the World.”

You can almost hear the depths of her awe in the clipped speech and the intensity of her delivery. (It’s a voice that grows more grating every day to my ears.) She can ACT, but not so well. This is Amy Goodman’s take on one of the most notorious CIA officers in American history.

If you have ever read about the fascist excesses of MKULTRA, consider that the Human Ecology Fund’s co-founder, Dr. Lifton, made them all possible.

He is widely considered a “cult expert.” In fact, his writing on cults for Scaife’s AFF is easily refutable CIA disinformation, CRAP, his stock-in-trade.

Lifton’s writing on mind control is also crap and a cover story that conceals widespread and ongoing illicit experimentation by the CIA, the subject of numerous books on the topic ignored by the media-at-large … and by Pacifica and The Nation, which have foisted this pariah upon the Left without so much as a mention of his past.

Pacifica managers and board members are old enough to recall the release of LSD upon an unsuspecting world by the CIA in the mid-’60s to DISTRACT, DISORIENT, DISCREDIT AND DEFUSE THE ANTI-WAR MOVEMENT, a case I make supported by Army biowarfare documents.

That was the work of Ms Goodman’s beloved Robert Jay Lifton.

Once again, paying Pacifica listeners have been fed deliberately misleading information that serves the CIA – on the basis of such frauds, the network has thrived.

I am publicly condemning Pacifica and Amy Goodman.

(Copies of a version of this complaint were sent privately to every member of the board at KPFK, the Pacifica outlet in Los Angeles. Not one response came back.)

No Boundaries: Shawna Forde and the Minutemen Movement
Oct 25