by David Caputo This just in…

AmericanThinker.com’s Michael Lopez-Calderon thinks that people who don’t buy the government’s line about 9/11 are “extremely dangerous” because they might “undermine our democratic nation’s war against the theocratic forces of radical, Jihadi-driven Islam”. Ouch.

And here I was thinking I was being patriotic trying to expose the bald-faced lies and brazen evasions that have constituted the “official story” of 9/11 up to this point. After all, if the Bush administration and/or its cronies DID perpetrate or facilitate the crimes of that day, the central justification for the ongoing war(s) against our officially designated enemies would be undermined indeed.

But, that must surely be because I find comfort in conspiracy theories. As Mr. Lopez-Calderon put it, “Conspiracy theories offer explanatory models of complex events to large audiences of the unsophisticated and under-educated.” Ouch again… The weak “attack the messenger as delusional but avoid directly criticizing any of their specific claims” methodology used by his article is all too familiar, but Lopez-Calderon expands upon this with a sinister twist. The main thrust of this twist is that 9/11 skeptics are a dangerous pathogen in the American body politic, infecting otherwise warlike and patriotic citizens, particularly the young, with a paralytic cynicism that weakens their resolve to lash out with sufficient ruthlessness at those irredeemable A-rabs who just can’t wait to kill us. Seems we just don’t realize how much being force-fed Lee Greenberg can fill those boys with blood-lust. (Blowback from cultural imperialism indeed…)

This, it seems, is the real question at hand.

Should these petit-Benedict-Arnolds still be allowed to roam freely and brazenly challenge (on the scandalously unregulated internet) our great and noble nation’s declared world-view?? Perhaps they should all be rounded up and held incommunicado in internment camps until the threat from “radical, Jihadi-driven Islam” has safely passed. That should only be a couple of months, right? Seems like the only sure strategy to keep them from doing things that “may lead more Americans, particularly the young, to withdraw their allegiance to their country.” Sounds like a national freaking emergency to me, neh? 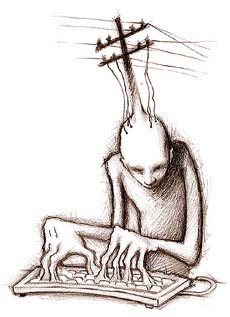 And about that intarweb thing… Another culprit of course is the unregulated, often unaccountable Internet-blogosphere, where virtually unfettered free speech has produced a downside, namely, an opening for every conceivable crackpot writer. In the past, such writers and their theories often were relegated to coffeehouses, salons, and obscure, dilapidated radical bookstores commonly found in college towns and or near major university campuses. They were a fringe relegated to relative obscurity. Today, thanks to the Internet’s incredible freedom as well as reach, no toiler is condemned to obscurity but on the contrary, with some talent, hard work, and catchy writing, he can reach audiences that may range in the millions. (links added) Oh God I could only hope… I’ve been getting so tired of those musty radical bookstores anyway. And millions you say… Sheesh… That’d be nice… Used to be in the old days I’d spend all night spread out at the local Kinkos, pasting together the carefully typed-out articles from my ragged gaggle of scribes. Now it’s just Type, Post, and watch the hit-counter spin like it’s a slot machine in Atlantic City. To think I used to spend all my weekends dropping off copies at the local coffeehouses and bookstores… But I digress…

In addition to Michael’s denouncement of 9/11 skeptics as essentially traitors scheming to bare America’s belly to the inevitable Scimitar of theological conquest, he links such scholars with Holocaust Deniers and Illuminati fans. He summarily dismisses ALL research, conclusions, and data that would suggest that A) the government’s case is fatally flawed, and B) that many 9/11 skeptics have meticulously researched and vetted data and conclusions. He provides links to sites that support his claims, like this one, but never gives links to any of the 9/11 Truth web sites that he is supposedly criticizing. Try digging a little deeper, Mike. You obviously don’t have any problem with America’s actions or agenda in the world so go ahead. It won’t put you at risk of “cynicism”, right? Watch a couple of David Ray Griffin videos and systematically debunk his points. Read Jim Hoffman’s analysis on his WTC7 site. Show me exactly how their arguments are flawed. I dare you. I don’t think you’ve actually got the gravitas to try. A genuine critique of their points might be a bit much to ask. Much easier to simply dismiss something out of hand and trash fellow columnists, no? We shall see I guess… Cross posted at http://www.TotallyFixed.com