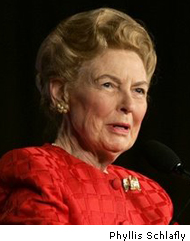 Over the past two months, many Republican pundits and members of Congress have been calling for the end of unemployment benefit extensions for the millions of Americans who can’t find work. Meanwhile, GOP Senators held the unemployment insurance (UI) extension bill hostage for weeks as 2.5 million Americans were left without the “desperately needed lifeline” of UI benefits. Even as five workers fight for every one job opening, Republicans are still calling the unemployed “spoiled” and suggesting that blocking benefits is fine because it only affects a “small amount of people.”

Last week at a fundraiser for Michigan GOP congressional candidate Rocky Raczowski, conservative pundit Phyllis Schlafly added her voice to the chorus crying out against government assistance for the poor or unemployed:

One of the things Obama’s been doing is deliberately trying to increase the percentage of our population that is dependent on government for your living. For example, do you know what was the second biggest demographic group that voted for Obama? Obviously the blacks were the biggest demographic, y’all know what was the second biggest? Unmarried women. 70% of unmarried women voted for Obama. And this is because when you kick your husband out, you’ve got to have Big Brother Government to be your provider. And they know that. They’ve admitted it. And they have all kinds of bills to continue to subsidize illegitimacy…

The Obama administration wants to continue to subsidize this group because they know they are Democratic votes.

Schlafly’s argument is specious. She talks about “subsidizing illegitimacy,” but not all single women are mothers. Less than 20 percent are mothers to young children. The rest include millions of widows, millions of young never-married women, and plenty in between — some of whom have kids, but most of whom do not.

The fact that programs like UI and food stamps help unmarried women is only a byproduct of the system designed to help everyone in need – men and women alike. In fact, men are receiving more UI benefits than women – the unemployment rate for men is a full 2.2 points higher than it is for women.

That didn’t stop Schlafly from doubling down on her falsehoods in an interview with TPM yesterday. “All welfare goes to unmarried moms,” she claimed. “They are trying to line up their constituency for Obama and Democrats against Republican candidates.”

Of course, government assistance goes to both genders. But moreover, considering that 84 percent of custodial single parents are mothers and a quarter of American children are being raised by unmarried mothers, supporting single women is critical for supporting children. As the Center for American Progress’ Liz Weiss puts it, “When single mothers lose their home, suffer from hunger, or can’t find a job, their children also lose their home, go hungry, or suffer from greatly reduced household resources.”

Previous Article
Roots of the Holocaust: Drawing a Line from Africa to Auschwitz
Next Article
Italian Artist Sparks Controversy with Hitler Pictures