Al Qaeda in Pakistan – “under the noses of Pakistan’s intelligence agencies?” 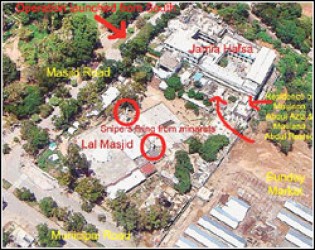 The latest national intelligence estimate hogging the headlines makes frightenting claims about Al Qaeda in Pakistan. I spent the morning searching for evidence. The report appears to be largely subjective and is not only factually insupportable – it defies rational explanation. There is mention of a new Al Qaeda “headquarters” in the tribal regions, armies in training, three years of Hell around the corner. All this is stated with certainty. The evidence? Cell phone calls overheard – but the callers’ locations not pin-pointed? Even AT&T can perform that service. “We don’t know where they are,” the authors of the estimate maintain.

There are other contradictions …

Abid Mustafa, a specialist in Muslim affairs living in the UK, has written of Musharraf’s bloodbath at the Masjid …

” … a close examination of the events preceding the current standoff, suggests that the entire saga has been ENGINEERED BY THE PAKISTANI GOVERNMENT.”

“What is evident is that the utilisation of force by the government to deal with both secular and Islamic forces exposes the intellectual bankruptcy of Musharraf’s mantra of ‘enlightened moderation. The intensification of fighting between the students of Lal Masjid and the Pakistani army has left hundreds dead and many injured. … Even before Musharraf’s ultimatum, his government was swift to attribute the entire blame for the current crisis on Abdul Rashid Ghazi – the principal of the seminary.”

The next step is a classic provocateur action (see “Blood, Carnage and the Agent Provocateur” in my archive) – deliberately brought about by Pakistan’s ISI, which remains close, due to generous Bush administration largesse, to the CIA.

“For the past six months the Musharraf government has tolerated the behaviour of the students whenever they chose to challenge its writ. The accumulation of illegal arms, the abduction of Pakistani socialites and policemen, and the seizure of six Chinese women was met with muted criticism from government officials. Furthermore, these activities were NOT CLANDESTINE, and were planned and executed in FULL VIEW OF ISI’s HEADQUARTERS located in close proximity to the confines of the Lal Masjid.”

None of this appears in our new National Intelligence Estimate, of course …

“The FREQUENT VISIT OF ISI OFFICIALS and GOVERNMENT REPRESENTATIVES NEGATES GOVERNMENT CLAIMS that it was exploring an amicable outcome – especially when measured against the ferocity of the Pakistani government’s response to similar incidents in tribal agencies and elsewhere in Balochistan.

“So why has the Pakistani government WAITED so long [provocateur actions always involve waiting by the authorities to bring tensions to a boil, as I described at length in the “Blood, Carnage” essay] to barricade the Masjid with military hardware fit for an overwhelming assault?”

The same questions, or “conspiracy theories,” reverberate around the region:

” … [It isn’t] explained how these elements had managed to find safe haven in Lal Masjid right under the noses of Pakistan’s intelligence agencies, who are infamously everywhere, so much so that the Supreme Court recently passed an order asking them to keep out of courts and demanded that their homes and offices be swept for listening and viewing devices. … Nor has anyone been able to explain how Lal Masjid was able to hoard a huge cache of weapons. ….”
http://www.hinduonnet.com/fline/stories/20070727004902400.htm

PRESIDENT Pervez Musharraf has won praise for exercising maximum restraint during the Lal Masjid standoff and exhausting all avenues for ending the crisis through talks before ordering military action. It has enabled the politically embattled leader to show that he is still in control and capable of hard decisions in the midst of a muscular agitation by the legal community that has questioned his legitimacy and left him weak beyond imagination.

The showdown at the mosque removed the ousted Chief Justice’s legal challenge against his ouster from the front pages of newspapers and from the top news stories on television. Conspiracy theorists saw a connection between an unprecedented order of the court against the country’s intelligence agencies on July 2, and the start of the showdown at Lal Masjid the day after. Most of them commended the government for holding back, managing to bring out 1,200 young men and women, and trying to get the rest out before going for an all-out strike.

That does not mean that the hard questions have gone away. As the operation was still going on, Religious Affairs Minister Eijaz ul-Haq made the shocking admission that Lal Masjid was a “hub and a transit point” for all kinds of terrorists “from North Waziristan to Bajaur to Karachi”. They used to come there for a place to hide and stay there until whatever they were wanted for was forgotten, he added. Earlier, Musharraf said the compound was swarming with cadre of the banned organisation, Jaish-e-Mohammed.

Neither explained how these elements had managed to find safe haven in Lal Masjid right under the noses of Pakistan’s intelligence agencies, who are infamously everywhere, so much so that the Supreme Court recently passed an order asking them to keep out of courts and demanded that their homes and offices be swept for listening and viewing devices.

The mosque’s development as a militant centre was after 2002, and so the Musharraf regime cannot hang the blame on the previous Nawaz Sharif government. Nor has anyone been able to explain how Lal Masjid was able to hoard a huge cache of weapons, which, going by the briefings of military spokesman Major-General Waheed Arshad during the operations, included rocket launchers, Kalashnikovs, small arms and mines, which they used to booby-trap the compound wall during the operation.

Students of other seminaries did not march to the rescue of Lal Masjid, nor did suicide-bombers alleged to be inside blow themselves up. That raised the question if the backlash threat the government had used for six months to put off dealing forcefully with Abdul Aziz and Abdul Rashid Ghazi, the cleric brothers who ran the complex, was exaggerated.

It is clear now, if it was not before, that most Pakistanis were uncomfortable with the brand of Islam being preached at Lal Masjid. Nor did they want religion thrust down their throats the way the brothers were attempting to. Much before the operation, the Wakaful Madaris, a national federation of seminaries, had cancelled its recognition of the Jamia Hafsa and distanced itself from the brothers.

But it is still early to rule out a backlash. In Waziristan, where Pakistani forces are battling militants as part of the American-led war on terror, there have been two suicide attacks targeting security forces since the Lal Masjid showdown began. Unidentified gunmen killed three Chinese automobile engineers in Peshawar in what may have been a retaliation against China for demanding that those from the Hafsa-Fareedia-Lal Masjid brigade who kidnapped seven of its nationals from a massage parlour be punished. The entire North-West Frontier Province (NWFP), including the tribal agencies, saw unrest from the time the operation began. The Muttahida Majlis-e-Amal, a coalition of six religious parties which rules the NWFP, has led a few protests and announced a three-day mourning for those killed inside Lal Masjid.

The period after 9/11 up to 2004 saw a lot of government activity to bring militant groups under control, including the banning of many groups and arrests of their leaders. But in what appeared to be a nod-nod wink-wink arrangement, the leaders were released for lack of evidence and the groups returned under different names. In his eight years in power, the crackdown on Lal Masjid was the first decisive action Musharraf took against religious extremism. Many see the operation against the mosque as sending out a message to other radical elements in the country. So here is another hard question. Will President Musharraf extend this new determination to crack down on other hotbeds of extremism in Pakistan, especially in the NWFP?

A prime candidate is Mullah Fazlullah, a cleric who runs an FM radio station in Swat, preaching his Taliban-style views on it. He told a television channel that if the government tried to take him on, as it did with the Lal Masjid clerics, he would unleash a well-trained guerilla army on the security forces. At a National Security Council meeting on June 4, Musharraf was told about the fast-spreading “Talibanisation” of the NWFP and the tribal areas.

Even before the crackdown on Lal Masjid, the government managed to send out an ambivalent signal that raised doubts about its intentions vis-a-vis other radicals in the country. Included in the negotiating team that made the last-ditch effort to convince Ghazi to surrender was Mullah Fazlur Rehman Khalil, founder of the banned group Harkat ul Ansar. A known al Qaeda sympathiser, Khalil tried to take 70 militants from Pakistan to Afghanistan when the United States launched its war against the Taliban.

He was arrested in 2004 under a law for the maintenance of public order, but was released shortly afterwards for “lack of evidence”. Khalil was once again reported arrested on May 2 as he was driving towards Lal Masjid with a cache of weapons in the boot of his car.

The next he was heard of was when he reappeared at the security cordon around Lal Masjid in the early hours of July 10 as part of the government delegation to hold talks with Ghazi. Reporters were shocked to see him sitting in the car of Pakistan Muslim League president Chaudhary Shujaat Hussain, who was leading the team.