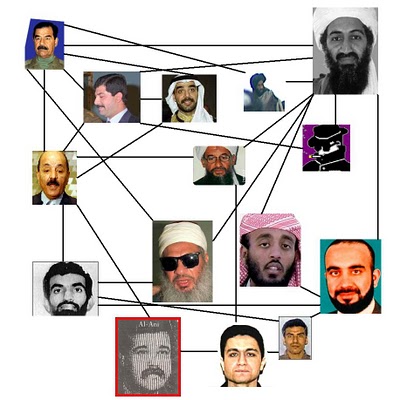 Bill Gallagher: … When people hear “al-Qaeda,” it’s natural that they think of Osama bin Laden and the Sept. 11 attacks. The insurgency, sectarian violence and opposition to the U.S. occupation in Iraq are not about fighting al-Qaeda, but that’s how Bush’s fiasco there is being branded.

McClatchy Newspapers’ Baghdad correspondent Mike Drummond exposed the sinister rhetorical shift, noting in a recent report, “U.S. forces continue to battle Shiite militia in the south, as well as Shiite militia and Sunni insurgents in Baghdad. Yet America’s most wanted enemy at the moment is Sunni al-Qaeda in Iraq. The Bush administration’s recent shift toward calling the enemy in Iraq ‘al-Qaeda’ rather than an insurgency may reflect the difficulty in maintaining support for the war at home more than it does the nature of the enemy in Iraq.”

In a major speech at the National War College last week, Bush mentioned al-Qaeda 27 times. McClatchy’s Jonathan Landley reports, “Bush called al-Qaeda in Iraq the perpetrator of the worst violence racking that country and said it was the same group that carried out the 9/11 attacks.”

Pure crap. Al-Qaeda has become a generic name, in many cases a self-proclaimed label for foes of the U.S. invasion. Since some of the Iraqi Sunnis started calling themselves “al-Qaeda in Iraq” or “al-Qaeda in Mesopotamia,” the Bush propaganda ministry saw an opportunity to conflate the invasion of Iraq with the Sept. 11 attacks.

Bush went on to claim, “Al-Qaeda is the main enemy for Shia, Sunni and Kurds alike. Al-Qaeda is responsible for the most sensational killings in Iraq. They’re responsible for the sensational killings on U.S. soil.” Those are demonstrable lies. Bush hardly mentioned sectarian violence. U.S. military intelligence even disputes Bush’s wild claims. All of this is intentional and meant to deceive and distort.

The Iraq Study Group and intelligence estimates placed the number of Iraqi insurgent forces at approximately 20,000 combatants. At most, 5 percent of that number are foreigners fighting in Iraq, nearly all going there in response to the U.S. invasion. Some are Iranians supporting Shiites; others Sunnis from Syria and Saudi Arabia supporting Iraqi Sunnis. Nearly all come from nations with strategic interests in the region and want to help their ethnic or religious comrades.

The lightning rod for these expeditionary forces is the presence of U.S. forces in the heart of Islam. Bin Laden, hiding in the mountains of northern Pakistan, just sits back and relaxes, enjoying the bloody spectacle and the gift to radical Islam Bush brought him.

The true ties involving Iraq, deadly chemical weapons and the United States rarely get a mention. Saddam’s allies in killings tens of thousands of Kurds included Ronald Reagan, George H.W. Bush, Donald Rumsfeld, Robert Gates and others. Reagan as president, Bush as vice president, Rumsfeld as special envoy to the Middle East and Gates as a senior CIA officer all provided help and support for Saddam’s murderous assaults on his own people.

The Iraqi Special Tribunal has sentenced Saddam’s cousin Ali Hassan al-Majid to death. Known as “Chemical Ali,” he was the point-man in using chemical weapons first on Iranian troops during the Iraq-Iran war, and then later on Iraqi Kurds supporting the Iranians.

On the Smirking Chimp Web site, Barry Lando described how, when Ali’s sentence was read on June 24, “all the key players in the media were there to capture the dramatic courtroom scene. What none of the reporters mentioned, however, was that when Saddam and Chemical Ali and the rest of the Saddam killers were doing their worst, the U.S. governments of Ronald Reagan and later George Bush Senior were their de facto allies, providing them with vital satellite intelligence, weapons and financing, while shielding them from U.N. investigations or efforts by the U.S. Congress to impose trade sanctions for their depredations.”

Robert Parry, who broke many of the Iran-Contra stories for AP, wrote, “Hussein’s silence was golden for the international arms dealers who supplied his regime and the foreign officials who facilitated the shipments.” So when the “brutal dictator” — as George W. liked to call him — was sent to the gallows, Bush the Elder, Rumsfeld and Gates “were among those who could breathe a little easier after the hangman’s noose had choked the life out of Hussein,” Parry concluded.

Bin Laden never had any kind of relationship with Saddam, but many intimates of our president did. So far, they have been able to choke the life out of that truth.
–
Bill Gallagher, a Peabody Award winner, is a former Niagara Falls city councilman who now covers Detroit for Fox2 News. His e-mail address is gallaghernewsman@sbcglobal.net.