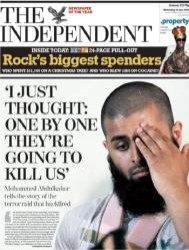 Mohammed Abdulkahar tells the story of terror raid that backfired ‘I just thought: one by one they’re going to kill us’ Independent | 14 June 2006 At about four o’clock in the morning, I was woken by screams that I had never heard before. My younger brother was screaming and, from upstairs, from my room, I could hear him screaming, so I got out of bed. I just had my boxer shorts on and a T-shirt. It was dark and I assumed a robbery was happening. As I made the first step down the stairs, my brother was still screaming and I turned round to look at the stairs. As soon as I turned round, I saw an orange spark and a big bang. I flew into the wall and I slipped down….. I was on the floor. I looked on my right, on my chest, and saw blood coming down my chest and saw the hole in my chest. At that moment, I knew I was shot. The first thing I was thinking was that an armed robbery was taking place. As I went down, I saw an object flying in my face, so I put my hand over my face. At that moment, I did not know what object it was, but I know now it was the gun. He tried to hit me over the face with it. I saw the shotgun in my chest and I was begging ‘Please, please I cannot breathe’. He just kicked me in my face and kept on saying ‘Shut the fuck up’. I said ‘Please, I cannot breathe’. One of the officers slapped me over the face. He was saying ‘Just shut the fuck up, stay there, stay there’. The comments of Tony Blair, that comment I heard, it was the most hurtful thing. He said he was 101 per cent for the raid, 101 per cent for the hole in my chest. I’m the same age as his son – I’m as innocent as his son … CONTINUED: http://news.independent.co.uk/uk/crime/article994078.ece