A World without Nazism: Anti-Fascist Organization to be Created Soon by Council of Europe 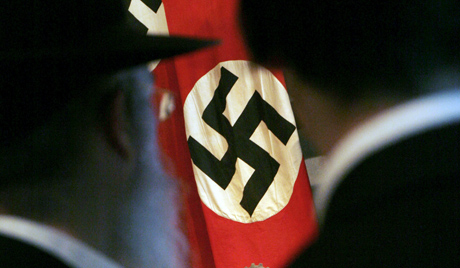 TEL-AVIV, May 5 (Itar-Tass) – A new international organization called “World without Nazism” will be set up soon.

Boris Shpigel, a member of the Russian Federation Council and the head of the World Congress of Russian-speaking Jewry, told Itar-Tass on Tuesday that he would hold a conference in Minsk, Belarus, early in June. It will continue a series of forums devoted to the lessons of WWII. The first two forums have been held in Berlin and Riga.

“The aim of this event is to educate young people,” Shpigel said as he was presenting memorable gifts to activists of veteran organizations of Israel.

“This is going to be an assembly of people who will think of how to prepare some educational programs for the young,” he stressed.

Besides, a new organization “World without Nazism” will be set up in Minsk with approval of the Council of Europe.

“Organizations from 28 countries have already applied for membership. The new organization will first and foremost monitor phenomena like the revival of Nazism, the glorification of Nazi criminals and revival of the memory of those who fought together with the Nazis,” the Russian lawmaker went on to say.

“Today, we can see it in Ukraine and Estonia. Sadly but we are also witnessing these phenomena in Moldova, Romania and other countries. In fact, this is alteration of values and the rewriting of history,” Shpigel went on to say.

He thinks that the absence of ideological convictions makes Russian young people to forget history.

“The most important thing which should be done to avert the recurrence of what we were through is to fight against the glorification of Nazism and rehabilitation of Nazi criminals as well as the revision of WWII results,” Shpigel went on to say.

The lawmaker also said that the Victory Day parade on Red Square would be broadcast live from Red Square in countries where the World Congress of Russian-speaking Jewry has its branches: Germany, Britain, Israel and Latvia. After the broadcast, Russian artists will sing wartime songs for veterans and the Russian-speaking population of the aforesaid countries.

In the meantime, the First Russian Congress of Veterans of the Great Patriotic War, of the Russian Armed Forces and of local wars that opened in the Russian capital on Tuesday came out against attempts to falsify history and called for the need to increase patriotic feelings of young people.

Marshal of the Soviet Union Dmitry Yazov said that the task of the veterans was to preserve their inspiration, tell Russia’s younger generation that it was the Soviet Union who carried the main burden of the war and also instill in them a feeling of pride and respect for the feats of their grandfathers and great grandfathers.

Yazov called for reviving the best traditions of Russian officers through support of military schools across Russia.

“No other war can be compared to it either by scale or the affect it had on human fates,” Galeyev said.

The participants in the congress criticized attempts to distort the logic of historical events, depreciate the contribution of the Soviet people to victory and separate the people from its leader.

Galeyev believes that in those hard days victory became possible not only because of the heroism of the people but also thanks to well-thought-out governance of the country’s leaders.

The veterans unanimously passed a resolution, which says that the congress would gather at least once a year to honor war veterans and mark vital dates in Russia’s military history.

The Far-Right Movement Behind Arizona Copycat Bills (Excerpt)
May 09