THE unmarked military-style jet swooped down at high speed through the valley, twice circled the smoldering black scar where Flight 93 had careered into the ground just seconds earlier and then hurtled off over the horizon.

At least six eyewitnesses saw the mysterious aircraft on the morning of September 11 last year. But the US authorities deny it ever existed.

So when George Bush laid a wreath yesterday at the crash site in a remote valley outside Shanksville, Pennsylvania, he was one of only a handful of people who know what really happened to the 40 innocents and four hijackers aboard the doomed United Airlines Boeing 757-200.

Those unimaginable final seconds as passengers showed courageous defiance apparently wrestling for control of the aircraft have become one of the defining images of the tragedy.

But of the four aircraft taken on September 11, the exact fate of Flight 93 after its two-hour journey is proving difficult for US officials to explain.

What was the white jet doing there and why won’t they admit to its presence? Why did other witnesses see smoke and flames trailing from Flight 93 as it fell from the sky, indicating a possible explosion aboard?

Or – and this is proving to be the most uncomfortable question of all – in the moments before the airliner piled into the black, spongy earth at 575mph did an American fighter pilot have to do the unthinkable and shoot down a US civil airliner?

Susan Mcelwain, 51, who lives two miles from the site, knows what she saw – the white plane rocketed directly over her head.

“It came right over me, I reckon just 40 or 50ft above my mini-van,” she recalled. “It was so low I ducked instinctively. It was traveling real fast, but hardly made any sound.”Then it disappeared behind some trees. A few seconds later I heard this great explosion and saw this fireball rise up over the trees, so I figured the jet had crashed. The ground really shook. So I dialed 911 and told them what happened.

“I’d heard nothing about the other attacks and it was only when I got home and saw the TV that I realized it wasn’t the white jet, but Flight 93.

Didn’t think much more about it until the authorities started to say there had been no other plane. The plane I saw was heading right to the point where Flight 93 crashed and must have been there at the very moment it came down.

“There’s no way I imagined this plane – it was so low it was virtually on top of me. It was white with no markings but it was definitely military, it just had that look.

“It had two rear engines, a big fin on the back like a spoiler on the back of a car and with two upright fins at the side. I haven’t found one like it on the internet. It definitely wasn’t one of those executive jets. The FBI came and talked to me and said there was no plane around.

“Then they changed their story and tried to say it was a plane taking pictures of the crash 3,000ft up.

“But I saw it and it was there before the crash and it was 40ft above my head. They did not want my story – nobody here did.”

Mrs. Mcelwain, who looks after special needs children, is further convinced the whole truth has yet to come out because of a phone call she had within hours from the wife of an air force friend of the family.

“She said her husband had called her that morning and said ‘I can’t talk, but we’ve just shot a plane down,’ ” Susan said. “I presumed they meant Flight 93. I have no doubt those brave people on board tried to do something, but I don’t believe what happened on the plane brought it down.

“If they shot it down, or something else happened, everyone, especially the victims’ families, have a right to know.”

Lee Purbaugh, 32, was the only person to see the last seconds of Flight 93 as it came down on former strip-mining land at precisely 10.06am – and he also saw the white jet.

He was working at the Rollock Inc. scrap yard on a ridge overlooking the point of impact, less than half a mile away. “I heard this real loud noise coming over my head,” he told the Daily Mirror. “I looked up and it was Flight 93, barely 50ft above me. It was coming down in a 45 degree and rocking from side to side. Then the nose suddenly dipped and it just crashed into the ground. There was this big fireball and then a huge cloud of smoke.” 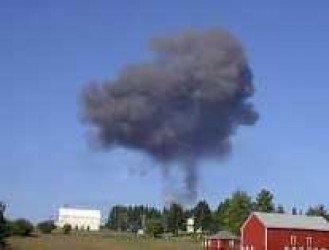 But did he see another plane? “Yes, there was another plane,” Lee said. “I didn’t get a good look but it was white and it circled the area about twice and then it flew off over the horizon.”

Tom Spinelli, 28, was working at India Lake Marina, a mile and a half away. “I saw the white plane,” he said.

“It was flying around all over the place like it was looking for something. I saw it before and after the crash.”

India Lake also contributes to the view there was an explosion on board before the Newark-San Francisco flight came down. Debris rained down on the lake – a curious feat if, as the US government insists, there was no mid-air explosion and the plane was intact until it hit the ground.

“It was mainly mail, bits of in-flight magazine and scraps of seat cloth,” Tom said. “The authorities say it was blown here by the wind.” But there was only a 10mph breeze and you were a mile and a half away? Tom raised his eyebrows, rolled his eyes and said: “Yeah, that’s what they reckon.”

Light debris was also found eight miles away in New Baltimore. A section of engine weighing a ton was located 2,000 yards – over a mile -from the crash site. Theorists point out a Sidewinder heat-seeking missile attacks the hottest part of aircraft – the engine.

The authorities say the impact bounced it there. But the few pieces of surviving fuselage, local coroner Wallace Miller told us, were “no bigger than a carrier bag”.

Nearly all the passengers were reduced to charcoal on impact and the largest piece of human tissue found was a section of spine eight inches long.

CURIOUSLY, military officials insist there was never any pursuit of Flight 93, although they were informed that it was a suspected hijack at 9.16am, 50 minutes before the plane came down.

At 9.35am they assumed it was heading for Washington DC after it changed course in a 180 degree turn and three F-16s – top speed 1,800mph – now patrolling over the capital were told to “protect the White House at all costs”.

An anonymous flight controller said on the day that an F-16 was “in hot pursuit” of Flight 93 – Washington to Shanksville is seven to 10 minutes flying time.

A few minutes before the crash Bill Wright, piloting a single-engine Piper, could see Flight 93 three miles away, but was suddenly told to turn away and land immediately without explanation.

At 9.58am a 911 call – the last mobile phone contact from Flight 93 – was made from one of the airliner’s toilets by passenger Edward Felt.

Glenn Cramer, the emergency supervisor who answered it, said on the day: “He was very distraught. He said he believed the plane was going down.

“He did hear some sort of an explosion and saw white smoke coming from the plane, but he didn’t know where. And then we lost contact with him.” Glenn Cramer has now been gagged by the FBI.

Also, according to sources, the last seconds of the cockpit voice recorder are the loud sounds of wind, hinting at a possible hole somewhere in the fuselage. What caused the smoke and explosion? Why the wind sounds?

The FBI’s later explanation for the white jet was that a passing civilian Fairchild Falcon 20 jet was asked to descend from 34,000ft to 5,000ft some minutes after the crash to give co-ordinates for the site. The plane and pilot have never been produced or identified. Susan Mcelwain says a Falcon 20 was not the plane she saw.

FURTHER verification that some kind of military aircraft was operating in the area is scientifically irrefutable.

At 9.22am a sonic boom – caused by supersonic flight – was picked up by an earthquake monitoring station in southern Pennsylvania, 60 miles from Shanksville.

That Todd Beamer and others launched an assault on the hijackers there is no doubt. The brief extracts released from audio tapes indicate a fierce struggle going on at the cockpit door.

But nobody – official or otherwise – has categorically said the group got into the cockpit or that their actions led to the crash. Those final, agonizing moments are mere presumption.

President Bush and his team have the whole story. So why aren’t they telling the rest of us?

Passenger Edward Felt made an emergency call from the plane. He spoke of an explosion and seeing some white smoke. The supervisor who took the call has been gagged by the FBI

UA93 was identified as a hijack at 9.16am. At 9.35am three F-16s were ordered to “protect the White House at all costs” when it turned towards the capital. At 10.06am it crashed at Shanksville, less than 10mins flying time from Washington

The FBI insists there was no military plane in the area but at 9.22am a sonic boom – caused by a supersonic jet – was picked up by an earthquake monitor in southern Pennsylvania, 60 miles away from Shanksville.