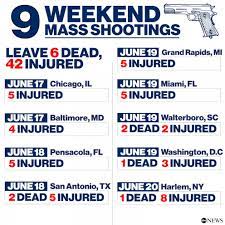 EDITOR'S NOTE: Republican opposition to gun control is widely attributed by the media to fear of the NRA and the party's core base. But this is entirely speculative, an assumption accepted as fact. Of course, campaign donations and the votes of gun fanatics are factors. But motivation isn't always self-evident. Yet mind reading is a constant in the news industry. Hard-right legislators clear the path for mass murder, but they couldn't possibly want that. Must be about money and the ballot box. This facile explanation is repeated constantly, and before long it is ingrained as consensus reality.

But the GOP has shown no interest in saving lives in recent years.  At the peak of the coronavirus pandemic, for instance, Republican legislators and propagandists fought any attempt to quell transmission. Trump held super-spreader rallies. GOP legislators refused to wear masks, and attacked respected epidemiologists viciously. Vaccination was supposedly worse than the disease itself. Right-wing quacks disseminated lethal lies. That is all the Republicans had to offer. Trump appeased critics with an eye on the upcoming election by pushing for a vaccine -- and his party took a rare stand against one of the few sensible decisions made in his term as president.

The same insane logic resurfaces in GOP intransigence against gun control. They know that mental illness doesn't explain slaughter in the schools. They also know that the solution isn't more guns. They know the result can only be more bloodshed. Republicans didn't fear lobbyists when they were spreading a lethal disease. Pharma's continued financial support wasn't even a consideration. Republicans wanted a cull, a fascistic means of killing "useless eaters" -- the elderly, the infirm, minorities. Mind reading isn't necessary to support this observation. It is found in the public record. Some Republicans admitted it publicly, most notably on Fox News. The far-right, American fascists, have no problem with mass murder. It is even considered desirable. Perhaps we should stop assuming that the GOP is afraid of the NRA, and consider another explanation: they want us dead  -- in great numbers. Preposterous? What else was the herd immunity option, favored  by talk radio wingnuts, but acceptance of uncontrolled transmission and death?

Mass shooters are terrorists. So, to judge by their actions, are Republicans on the far-right. It was evident during the pandemic, and it is now. Republicans want us dead. Does that seem far-fetched? They pulled out the stops to further transmission of disease, even in their own states. They were not only indifferent, they were responsible for hundreds of thousands of deaths. As I say, they aren't stupid. They knew it.  Republicans were aware that their lies were deadly. And they know that their stubborn refusal to deal with assault weapons contributes to the leading cause of child mortality in the US -- guns. Because they fear the NRA? Or is there much more to it?

We've heard the bromides. But the authoritarian personality has no interest in "freedom." Suporting red flags has never cost Republicans votes. And who do they fear most, the GOP's minority core base of gun fetishists, or the majority of voters in their own party who favor reforms? The NRA is powerful, but not omnipotent. If the lobby ceased to exist, the party would survive. There are other lobbies, wealthy donors, a more expansive share of the electorate who will back them if they ever reclaim their sanity. The NRA doesn't keep the party afloat. But the Trump supporting fascist right, autocrats parading as Christians (as Hitler did before he gained enough power to drop the charade), comprise a death cult.

The GOP has also refused to budge on global warming since it set Al Gore's hair on fire in the '90s -- despite rising death toll  related to flooding, drought, resultant mass starvation (threatening to kill 20 million in Afghanistan alone) and fire. Humanity is already snared in the mass extinction trap set by the fossil fuel industry.

What is human life to the soulless?

The infantile gullibility of the American electorate has to stop. We have tools to turn the death spiral around. Democracy exists to hobble tyranny, and we should all consider holding onto it.

" ... Let's also stop pretending that Republican legislators who oppose gun regulation actually care about saving our kids from those atrocities. They don't." 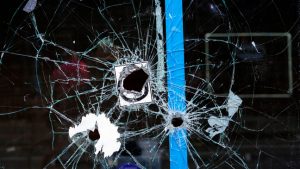 Before the next mass shooting, which is likely to occur tomorrow, someone should mention what is most obvious and disturbing about America's endless gun safety debate. Congressional Republicans are unwilling to restrict their constituents' access to assault weapons, even though they know that means many more innocent children (and adults) will die.

Or to put it even more bluntly, Republicans block sensible gun legislation because they are perfectly willing to sacrifice little kids in order to protect the most extreme interpretation of "Second Amendment rights." When Rep. Eric Swalwell, D-Calif., asked at a recent hearing whether his Republican colleagues were there to protect "the kids or the killers," they fumed in outrage. But they had no honest answer to his question.

Instead, Republicans offer a continuous stream of irrelevant and pointless "solutions" that will do nothing to stem the tidal wave of bloodshed. They yammer about mental health, as if they've ever been willing to fund adequate access to psychological services — and as if the mentally ill are a principal source of gun violence, which is assuredly untrue. They vow to "harden schools," and to check the locks on school doors every week, as if that would prevent a shooter from getting inside — or stop a shooter who lurks outside a school building when classes end.

They will pontificate ad nauseam about anything and everything except the kind of gun laws that could mitigate the slaughter.

While the Republicans and their sponsors in the gun lobby try to distract us from plain facts, the prevention of mass shootings is not mysterious or arcane. Exceptionally clear data show that banning the sale of assault weapons and high-capacity magazines tends to prevent mass shootings.

When President Bill Clinton and congressional Democrats passed an assault-weapons ban in 1994, mass shootings declined; when that ban expired 10 years later, mass shootings increased. Millions of those weapons of war were already in private hands when the ban commenced, so the decline in mass shootings was gradual — but when the ban ended, skyrocketing sales of the AR-15 and similar rifles initiated a very robust resumption of carnage.

Last year, a team of researchers at Northwestern University's School of Medicine again examined the history of the assault-weapons ban. They eliminated a source of confusion about the law by looking only at mass shootings — incidents resulting in the deaths of four or more people — rather than all gun deaths, as prior studies had done.

According to Dr. Lora Post, who led that 2021 study (and who happens to belong to the National Rifle Association), their review found that "if you prevent the access to assault weapons, high-capacity magazines, and semi-automatic or rapid-fire guns, it prevents the actual incident itself... people don't even go out and do a mass shooting in the absence of an assault rifle."

The study found that during the ban, its provisions prevented at least 11 mass shootings and that had it continued, another 30 such incidents would have been prevented. Post also remarked that "purchase of the assault weapon is often the final step in the preparation and execution of a mass shooting," an observation confirmed again this week when a perp bought his AR-15 just hours before going into a Tulsa hospital to kill his doctor and three others.

The Republican deniers may scoff at the 1994 ban, citing cherry-picked data to claim it didn't work. They may point out, correctly, that mass shootings represent a very small percentage of gun deaths. But in the meantime, we have seen several major industrial countries that legislated weapons bans after horrific school shootings and similar bloody tragedies.

The results of that gigantic social experiment are undeniable: Those countries suffer a tiny fraction of the mass shootings that now occur here constantly.

Bear in mind that other industrialized nations endure all the same conflicts that afflict us. Their populations include platoons of alienated boys, frustrated men, hateful racists and seething lunatics of all sorts. Yet in those places, dangerous men don't have easy access to weapons that kill many people very quickly.

Why can’t we lobby to allow Texas to secede?

At one time, our democracy was the best and safest place to raise children.

If Texas did not permit buying two assault rifles and nearly 500 rounds bullets without asking any questions as to why this killing gear was being purchased, 21 lives would not have been lost last month in Uvalde.

If an assault rifle was used to down a deer, that deer would be ripped to shreds. Those who had to witness the remains of Uvalde’s children will be traumatized for life.

When the Constitution was drafted, the Second Amendment was concerned about revolutions and single-shot muskets, not an individual with a weapon that could rip children’s heads and bodies apart.