1) Deal to Save Everglades May Help Sugar Firm Instead, 2) How Federal Sugar Subsidies are Destroying the Florida Everglades, 3) Sugar Magnate won’t Fire Assistant for KKK Link - The Constantine Report
0 SHARES

"Deal to Save Everglades May Help Sugar Firm" | New York Times | March 7, 2010: "Documents and interviews suggest that the price tag and terms of the deal could set back Everglades restoration for years, or even decades. ... The governor’s [Crist's] ambitious plan to reclaim the river of grass, as the famed wetlands are known, is instead on track to rescue the fortunes of United States Sugar. ... "

In "The Sweet Hereafter", in the November Harper's, writer Paul Roberts documents the long-term costs of subsidizing sugar.

Three counties south of Lake Okeechobee produce more than half the nation's sugar cane. Cane fields have destroyed the natural saw-grass marsh over an area the size of Rhode Island. Every acre is irrigated and drained with a costly series of pumps, dams, dikes and canals. Tax dollars pay for it all.

"Like Elvis or sex," Roberts writes, "sugar is everywhere and in everything - our economy and politics, our language and demographic makeup, our physiology and mass psychology, and, of course, our diet".

Roberts dates Florida's sugar boom to the Cuban revolution. Shortly after Fidel Castro came to power, the United States embargoed sugar, cigars and everything else made in Cuba. To replace lost imports, Florida's sugar-cane acreage jumped tenfold by the mid-1960s. 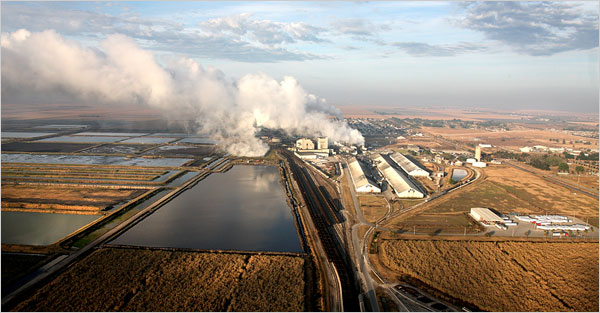 The biggest victim was the Everglades. The annual breeding population of elegant wood storks dropped from 20,000 in 1960 to 1,800 today. The endangered Cape Sable seaside sparrow population dwindled from tens of thousands to 3,500. Biologists say this vanishing bird shows the declining health of the Everglades.

But sugar cane cash still has the upper hand with politicians from both parties. Consider these facts:

In 1992, the Fanjul family, with vast holdings in Florida and the Dominican Republic, began playing both sides of the political game.

Pepe Fanjul was vice chairman of the Bush-Quayle Finance Committee. Alfy Fanjul backed Clinton and Gore and hosted a $120,000 fund-raiser.

After Clinton won, Interior Secretary Bruce Babbitt came up with a plan to save the Everglades very similar to one created by Alfy Fanjul. Taxpayers got to pay more than half the $700 million it would cost to filter pollutants from water flowing to the Everglades.

In 1996, sugar interests spent $25 million in an advertising campaign to successfully counter an environmental campaign run by Save Our Everglades.

Between 1990 and 1998, sugar interests spent $13 million on presidential and congressional races.

Today, domestic producers sell sugar at 22 cents a pound. Producers in most other nations get 8 cents. America's artificial price prop adds $1.4 billion to the shopping bills of U.S. consumers each year.

People like the Fanjuls get the best of both worlds. Owning half of all sugar lands in the Dominican Republic, they raise sugar cheaply, import it, then sell at artificially high U.S. prices.

Vice President Al Gore's plan to restore the Everglades over 20 years would cost taxpayers $8 billion. His program is backed by several environmental groups. But, Roberts point out, Gore's bill does nothing to regulate or curtail the vast sugar fields that created the problem in the first place. And the Fanjuls keep raising money for the Democrats.

Billionaire sugar baron Pepe Fanjul is refusing to fire his executive assistant, Chloe Black, despite her being married first to a former Ku Klux Klan leader, and then to the founder of a white-supremacist group.

Chloe, who has worked for the Cuban-born owner of Florida Crystals for more than 35 years, is the ex-wife of former KKK leader David Duke, and the current wife of Don Black, a former KKK grand wizard and member of the American Nazi Party. He now runs white-supremacist Web site StormFront.org.

Chloe's role with the powerful Palm Beach-based Fanjul family, which Page Six reported on in 2008, caused an outcry from civil-rights groups. Ironically, her duties include working with Fanjul's wife, Emilia, on The Glades, a Florida charter school that aims to help poor black and Latino children.

Heidi Beirich of the Southern Poverty Law Center, which tracks hate groups, told us: "Chloe Black is married to one of the most active white supremacists. We do not understand why she has not been fired by the Fanjul family. Her connections to white supremacists run so deep that it seems unthinkable that she work for a school for minority children." Chloe couldn't be reached for comment.

Reps for Fanjul yesterday confirmed Black was still working for the firm.

Paul Wilmot, spokesman for Florida Crystals, said: "While we may not agree with someone's politics, we wouldn't terminate them for that. We are a minority-owned company and enjoy a wide range of ethnic, racial, religious, lifestyle and political diversity among our thousands of employees.

"We will not discriminate against anybody, and that has been our policy forever. The rhetoric and beliefs of racial and other hate groups are abhorrent to Florida Crystals."

A source added, "This is business, it is not personal. Chloe had been with the company for 35 years when they found out about it, and she has always been a good employee. They don't agree with it, but they are not going to fire her."