" ... A couple of months ago, a national news network reported that one of Vitter’s key aides had a rap sheet about a mile long, including at least four convictions in Louisiana for drunk driving and charges of cocaine possession and resisting arrest. ... Vitter even voted against an amendment to make sure women raped or sexually assaulted on the job could have their day in court. The amendment was inspired by a woman named Jamie Leigh Jones, who was drugged and gang-raped while working for Halliburton in Iraq ... " 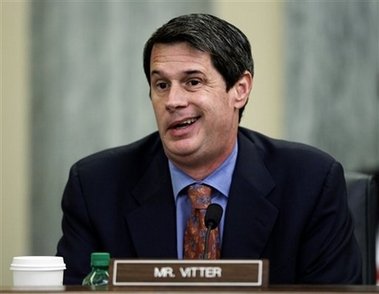 Lately, I keep hearing supporters of U.S. Sen. David Vitter say that we shouldn’t talk about his “serious sin.” The past is the past and the senator’s private life is nobody’s business, they say. Instead, we should focus on Vitter’s record as a senator. I say they should be careful what they wish for.

We all remember that David Vitter’s phone number showed up on the client list of the D.C. Madam a few years ago. As soon as word got out, he disappeared for a while and then held a sudden press conference in New Orleans with his wife at his side.

Vitter said he had asked his wife for forgiveness and God for guidance. Then he ran off the stage and back into hiding. He didn’t take questions from reporters and now pretends like the whole thing never happened. That’s how David Vitter handled his serious sin.

So, let’s push David Vitter’s private life to the side for a moment. Let’s say for the sake of argument that what he does behind closed doors is between him, his wife and God. Let’s talk about what he’s done in office.

A couple of months ago, a national news network reported that one of Vitter’s key aides had a rap sheet about a mile long, including at least four convictions in Louisiana for drunk driving and charges of cocaine possession and resisting arrest. To top it all off, he’s currently wanted by the Baton Rouge constable on an open warrant.

Not exactly a guy I’d like to have over for dinner, or hire to work for me, but Brent Furer worked on Vitter’s campaign and moved to Washington to work in his Senate office.

In January of 2008, Furer’s then-girlfriend called 911 to report that he had stabbed, beaten and held her hostage for an hour and a half. She said he broke her cell phone so she couldn’t call the police. He held a knife under her throat and asked her if she wanted to die, she said.

When Sen. Vitter found out about this troubling situation, he gave Furer a couple months worth of a taxpayer-funded vacation until the criminal case ended.

Furer pleaded guilty to three of the five charges and Vitter welcomed him back to the office.

In fact, Vitter didn’t just let Brent Furer keep his job — he put him in charge of women’s issues. Several leaders of anti-domestic violence organizations have said that Vitter assigned Furer to speak with them about the senator’s views on domestic-violence legislation.

All told, David Vitter paid Brent Furer more than $238,000 of your tax dollars. That’s not about Vitter’s personal life. It’s about how he spends the money that goes straight from your paycheck to Washington, D.C.

Speaking of paychecks, David Vitter voted against the Lilly Ledbetter Fair Pay Act, a law that guaranteed that radical idea that women and men should get equal pay for equal work. Maybe that’s not about David Vitter’s private life, but that’s definitely a personal issue for me and for millions of women trying to support their families.

Breast cancer is one of the leading causes of death for women and the best way to fight it is with early, annual mammograms. But David Vitter voted against a bill when he was in the Louisiana legislature that would have forced insurance companies to cover annual mammograms.

Last fall, David Vitter even voted against an amendment to make sure women raped or sexually assaulted on the job could have their day in court. The amendment was inspired by a woman named Jamie Leigh Jones, who was drugged and gang-raped while working for Halliburton in Iraq and then told that a loophole in her employment contract meant that she couldn’t seek justice against her attackers.

Forget about David Vitter’s personal peccadilloes. He put a man who attacked his girlfriend in charge of women’s issues, doesn’t think women deserve equal pay for equal work, opposed expanding coverage for life-saving mammograms and voted against a law to protect the rights of rape survivors.

When it comes to David Vitter, his “serious sin” isn’t even his worst.

Politico and some other news websites posted a supposed Democratic Memo entailing all manner of damaging dirt. Now Senator Vitter is still running with this memo because he obviously thinks or hopes that Louisiana voters are stupid. First he hopes Louisiana voters will ignore his strange sexual improprieties with prostitutes in New Orleans and DC. Now, he is going off to imaginary land with a fake memo through which he hopes to raise campaign money.

It is obvious and now a pattern with David Vitter being a disingenuous person. The sad thing is, Louisiana voters will likely vote for him no matter what he does. As for me, I'm hoping they'll vote for either Congressman Melancon, the Libertarian, or one of the other Conservative candidates and Vitter can ride off into the sunset to imaginary land or diaper dany hooker land ... or wherever people like him go.

First it was fake family values, now it's imaginary secret Democrat memos. Maybe David Vitter needs medication for his compulsion for lying or imagining things that aren't really there. Welcome to the delusional world of David Vitter, or perhaps just the world in which Vitter holds the strings and Louisiana voters do whatever he says and swallow whatever he feeds them. Bottom line, Louisiana deserves better.

Visit msnbc.com for breaking news, world news, and news about the economy

View Vitter's Fake memo here:(he's still trying to raise money off of it as though it's real)