Tele-Mantra Portals to the Mind - The Constantine Report
0 SHARES

Media » Tele-Mantra Portals to the Mind

Tele-Mantra Portals to the Mind

"... The global elite ... cannot put all of us in concentration camps physically, hence the next most powerful form of imprisonment is within the mind. ..." 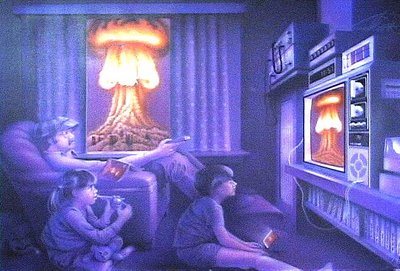 Our minds are being relentlessly subjected to a type of macabre programming, and most of us do not even realize it. Psychological programming could be defined as the ability to change or program a person to carry out a particular “action” or believe in a specific “agenda” without consciously being aware of the psychological and physical change she or he has received. It is a psychological programming or shall we say psychological warfare, which is being carried out against the human psyche and human species. It is a manipulation or rather obscure distortion of what we perceive to be reality.

Some techniques used in this form of programming are utilized to their full potential in the Western media. We see a woman in hijab (Islamic headscarf) on TV and automatically we see a bomb going off afterwards. We see Muslims praying and then another violent sequence of clips. Thus, we are being conditioned to create associate Muslims and Islam with terrorism. The elite illusionists use the TV as a technological talisman of black magic. Imam Abdul Alim Musa of Washington, D.C. calls this technique “perception management.” Just as capitalism is a form of ancient black magic, which puts the owners of capital in a position to become and behave as gods, thus it is with psychological programming. The sorcerers dazzle us with this new form of black magic used via technology.

We can refer to the culprits as the elite for simplicity's sake. Moreover, they are illusion creators and hold high positions in the hierarchy of darkness and death. If we are to call them by another name, we will fall into another form of black magic, which works to encapsulate us into discrimination against one group or ideology. The Arabs call this fitna, which could best be translated as division with a goal of creating instability and hostility in circumstances and situations that were peaceful beforehand. We also have a famous expression of the elite: divide and conqueror.

The global elite have been pulling our strings since antiquity. They cannot put all of us in concentration camps physically, hence the next most powerful form of imprisonment is within the mind. Once a man said there is no right or wrong, there is only popular opinion. One aspect of the elite shows its face as a triad, a three-headed beast. It's a form of U.S., British, and Israeli imperialist colonialism. It uses nationalism, religion, and politics to manifest itself in the visible spheres. They define our realities and convince us to accept mere illusions.

The most awesome example of this psychological programming is the series of post-9/11 wars. 9/11 itself is the epitome of a black magic sacrificial operation. A new society was created and a new agenda. The changes were justified by the term forged by former U.S. President George W. Bush: “The War on Terror."" The surveillance society was created and the passing of new legislation brought about the erosion of freedoms and liberties for U.S. citizens. This phenomenon grew out of the White House like a sinister alien slithering through the darkness.

US President Eisenhower warned us of a “shadow government” during the Cold war. This very shadow government or police surveillance society is still being built full scale in the U.S. Since the 9/11 attacks, the measures taken to increase security and surveillance of the nation-state are being presented as the norm that all Americans should accept with no questions asked. This is actually only the tip of the iceberg of what is to come, the beginning of the end.

The final goal will bring about a society where we are tracked like sheep with implantable chips and monitored constantly. Even the term “thought police” has arisen. You are not safe to think or challenge this shadow government and its objectives. People are being arrested and assaulted for protesting in the U.S. Americans and other Westerners alike must eventually come to realize that the main threat and real terror is this shadow government Eisenhower warned us about in his farewell speech and the elite families of internationalist bankers.

A shadow government born out of the military-industrial complex is becoming globalized in every country possible by force. The original intention of this shadow government was perhaps good. During the Cold War, Eisenhower wanted to create a shadow government which could take the reins of power if the Soviets launched a nuclear attack on the U.S., which would create total chaos. The shadow government would be prepared to take over in a form of martial law to create stability and continuity of government until civilian government could recuperate.

However, the Cold War is over and there is no longer a Russian threat of the spread of communism. Yet we still have this shadow government operating in a clandestine fashion behind the scenes. In addition, we still have NATO operating, which was another Cold War organization that claimed its goal was to prevent communist expansion. However, they are still swallowing up countries on the pretext of maintaining peace.

The elite politicians chose the vague term “war on terror” because they knew it was ambiguous, and it was something they could define in any manner they wished. They could also make up terrorists as they went along. It is a rewriting of history that we are dealing with. We should note that most Americans in particular (though I'm certainly not excluding the rest of the world) take the TV as a form of divine gospel. It is placed in a sacred location in the home. It is placed in the same location one would put a statue or holy object of reverence. Thus we have this magical dark portal to open any time we choose with the click of a button.

Terrorism is an ancient phenomenon. It is a war tactic. People can even argue about the definition of terrorism. If we are to have a war on abortion or drugs, we are of course going to lose if we believe we can completely end these behaviors. These are behaviors the human species has participated in since time immemorial. Terrorism is an ancient form of violence which cannot be attacked or ended. The U.S. government always cries ""terrorists"" to refer to the innocent Muslims they are murdering, when they are actually the ones committing terrorist acts themselves.

Let's dissect technological black magic. The magical-subliminal mantra is played in reverse whether you catch it consciously or subconsciously: Death is good and life is bad. Wrong is right and right is wrong. Evil is good and good is evil. Torture is good and mercy is bad. Freedom is imprisonment and imprisonment is freedom. Why do these elite politicians conduct themselves in such a manner? As one investigative journalist asked: ""Who are these people? Where do they come from? How do they get in power?"" Blood ritual and sacrifice is an important aspect of the post-9/11 wars, and the Earth seems to be the altar for human sacrifices.

Most importantly, there is something Westerners should understand. It does not take much research to uncover the facts either. The Western world will not be able to move forward economically, intellectually, or spiritually until they accept the fact that the war on terror is a fraud, a very simple form of black magic. Furthermore, it is a synthetic-manufactured fraud.

If there are no terrorists, we cannot have a war on terror. If there are no viruses, the excuse for vaccinations or anti-virus software for our bodies and computers becomes meaningless. The protocol is very simple. These CIA trained terrorists have been kept in a database. These are the so-called Muslim radicals that we now know as al-Qaeda or the Taliban, which hide under the religion of Islam. They make a video from time to time or release a taped speech. The government will bomb a train or blow up a building and blame it on these invisible terrorists we never see but are supposed to believe in via television. This is known as government-sponsored terrorism or false flag operations.

This is our only confirmation; the glorious synthetic one-eyed monster known as TV. ...

Western governments have used this psychological warfare many times to create coups in other countries and bring about the desired change. The government creates a problem such as the 9/11 attacks in New York on September 11, 2001. Then they instigate the desired reaction through the media, with tricks such as George W. Bush giving his famous scripted speech after 9/11. Thereafter, the media gears people up for hate and reprisals through the programming of nationalism, religion, and racism.

Thus, as we have mentioned above, psychological programming has been successful in this fake war on terror. A constant state of fear is obligatory to achieve the desired change in the human species. Love and fear are the primary base emotions we are operating on. If the individual can be programmed to remain in total fear and give up rationality, thereafter, handing over his/her total being -- mind, body, and soul -- into the hands of an alien mechanism, he or she will then perform like a machine, a slave.

This is the final goal of the elite. The extraction of the soul and the eradication of rationality work to create not only a new man but a new reality, existence, and consciousness. It creates a slave. The experiments conducted in post-9/11 America are only the beginning of a larger experimental process meant to manipulate man into a new and more desired being. ...