Nazism and the University of Chicago’s Straussian Neo-Cons

It is now a matter of public record that immediately after the terrible tragedy of 11 September 2001, U.S. Secretary of War Donald Rumsfeld and his pro-Israeli Neo-Conservative Deputy Paul Wolfowitz began to plot, plan, scheme and conspire to wage a war of aggression against Iraq by manipulating the tragic events of September 11th in order to provide a pretext for doing so. Of course Iraq had nothing at all to do with September 11th or supporting Al-Qaeda. But that made no difference to Rumsfeld, Wolfowitz, their Undersecretary of War Douglas Feith, and the numerous other pro-Israeli Neo-Cons inhabiting the Bush Jr. administration.

These pro-Israeli Neo-Cons had been schooled in the Machiavellian/Hobbist/Nietzschean theories of Professor Leo Strauss who taught political philosophy at the University of Chicago in its Department of Political Science for many years. The best exposé of Strauss’s pernicious theories on law, politics, government, for elitism, and against democracy can be found in two scholarly books by the Canadian Professor of Political Philosophy Shadia B. Drury: The Political Ideas of Leo Strauss (1988); Leo Strauss and the American Right (1999). I entered the University of Chicago in September of 1968 shortly after Strauss had retired. But I was trained in Chicago’s Political Science Department by Strauss’s foremost protégé, co-author, and later literary executor Joseph Cropsey.

Based upon my personal experience as an alumnus of Chicago’s Political Science Department (A.B., 1971, in Political Science), I concur completely with Professor Drury’s devastating critique of Strauss. I also agree with her penetrating analysis of the degradation of the American political process that has been inflicted by Chicago’s Straussian Neo-Con cabal. Strauss was a protégé of Nazi Law Professor Carl Schmitt, who justified every hideous atrocity that Hitler and the Nazis inflicted on anyone, including the Jews. Chicago’s Neo-Cons are Neo-Nazis.

The University of Chicago routinely trained me and innumerable other students to become ruthless and unprincipled Machiavellians. That is precisely why so many neophyte Neo-Con students gravitated towards the University of Chicago or towards Chicago Alumni at other universities. Years later, the University of Chicago became the “brains” behind the Bush Jr. Empire and his Ashcroft Police State. Attorney General John Ashcroft received his law degree from the Neo-Con University of Chicago Law School in 1967. Many of his lawyers at the Bush Jr. Department of Injustice were members of the right-wing, racist, bigoted, reactionary, elitist, war-mongering, and totalitarian Federalist Society (A.K.A.:”Feddies”), which originated in part at the Neo-Con University of Chicago Law School. There Barack Obama would teach constitutional law. Feddies wrote the USA Patriot Act (USAPA) I and the draft for USAPA II, which constitute the blueprints for establishing an American Police State. Meanwhile, the Department of Injustice’s own F.B.I. is still covering up the U.S. governmental origins of the post 11 September 2001 anthrax attacks on Washington D.C. that enabled Ashcroft and his Feddies to stampede the U.S. Congress into passing USAPA I into law.

Integrally related to and overlapping with the Feddies are members of the University of Chicago Law School Movement of Law-and-Kick-Them-in-the-Groin-Economics, which in turn was founded upon the Market Fundamentalism of Milton Friedman, now deceased but long-time Professor of Economics at the University of Chicago. Friedman and his “Chicago Boys” have raped, robbed, looted, plundered, and pillaged economies and their respective peoples all over the developing world, especially people of color, and now here in the United States. This Chicago gang of academic con-artists and charlatans are proponents of the Nazi Doctrine of “useless eaters” that was condemned by the Nuremberg Judgment (1946). Pursuant to Friedman’s philosophy of Market Fundamentalism, the “privatization” of Iraq and its oil industry are already underway for the primary benefit of the U.S. energy companies (e.g., Halliburton , formerly under Bush Jr.’s Vice President Dick Cheney) that had already interpenetrated the Bush Jr. administration as well as the Bush Family itself. Enron.

Although miseducated at Yale and Harvard Business School, the “Ivies” proved to be too liberal for Bush Jr. and his fundamentalist Christian supporters, whose pointman and spear-carrier in the Bush Jr. administration was Ashcroft, a Fundie himself. The Neo-Cons and the Fundies contracted an “unholy alliance” in support of Bush Jr. For their own different reasons, both gangs also worked hand-in-hand to support Israel’s genocidal Prime Minister Ariel Sharon, an internationally acknowledged war criminal.

According to his own public estimate and boast in a 26 February 2003 speech before the American Enterprise Institute (another front-organization for Straussian Neo-Cons), President Bush Jr. hired about 20 Straussians to occupy key positions in his administration, intentionally taking offices where they could push American foreign policy in favor of Israel and against its chosen enemies such as Iraq, Iran, Syria, Lebanon, and the Palestinians. Most of the Straussian Neo-Cons in the Bush Jr. administration and elsewhere were and still are Israel-firsters: What is “good” for Israel is by definition “good” for the United States. Dual loyalties indeed. These same principles hold true for the not-so-closet Neo-Cons in the Obama administration: e.g., Rahm Emanuel, Larry Summers, Elena Kagan, Dennis Ross, Cass Sunstein (married to Samantha Power), Victoria Nuland, etc.

In addition, it was the Chicago Straussian cabal of pro-Israeli Neo-Cons who set up a special “intelligence” unit within the Pentagon that was responsible for manufacturing many of the bald-faced lies, deceptions, half-truths, and sheer propaganda that the Bush Jr. administration then disseminated to the lap-dog U.S. news media in order to generate public support for a war of aggression against Iraq for the benefit of Israel and in order to steal Iraq’s oil. To paraphrase advice Machiavelli once rendered to his Prince in Chapter XVIII of that book: Those who want to deceive will always find those willing to be deceived. As I can attest from my personal experience as an alumnus of the University of Chicago Department of Political Science, the Bible of Chicago’s Neo-Con Straussian cabal is Machiavelli’s The Prince. We students had to know our Machiavelli by heart and rote at the University of Chicago.

As for the University of Chicago overall, its New Testament is Allan Bloom’s The Closing of the American Mind (1987). Of course Bloom was another protégé of Strauss (and thus the intellectual grandson of Nazi Law Professor Carl Schmitt), as well as a mentor to Wolfowitz. In his Bloom-biographical novel Ravelstein (2000) Saul Bellow, longtime member of the University of Chicago Faculty, outed his self-styled friend Bloom as a hedonist, pederast, and most promiscuous homosexual who died of AIDS. All this was common knowledge at the University of Chicago, where Bloom was and is still worshiped on a pedestal and his elitist screed against democratic education in America still revered as gospel truth.

In Ravelstein Wolfowitz appeared as Bloom’s protégé Philip Gorman, leaking national security secrets to his mentor during the Bush Sr. war against Iraq. Strauss hovered around the novel as Bloom’s mentor and guru Professor Davarr. Strauss/Davarr is really the eminence grise of Ravelstein. With friends like Bellow, Bloom did not need enemies. On the basis of Ravelstein alone, Wolfowitz warranted criminal investigation by the F.B.I.

Immediately after the Bush Jr. administrations wanton aggression against Iraq, the University of Chicago chose the occasion to officially celebrate its Straussian Neo-Con cabal responsible therefore, highlighting Wolfowitz Ph.D. ’72, Ahmad Chalabi, Ph.D. ’69 (the CIA’s Iraqi puppet), Abram Shulsky, A.M. ’68, Ph.D. ’72 (head of the Pentagon’s special “intelligence” unit), Zalmay Khalilzad, Ph.D. ’79 (Bush Jr.’s roving pro-consul for Afghanistan and then Iraq), as well as faculty members Bellow, X ’39, and Bloom, A.B. ’49, A.M. ’53, Ph.D. ’55, together with Strauss. According to the June 2003 University of Chicago Magazine, Bloom’s rant “helped popularize Straussian ideals of democracy.” It is correct to assert that Bloom’s book helped to popularize Straussian “ideas,” but they were blatantly anti-democratic, Machiavellian, Hobbist, Nietzschean and elitist to begin with. Only the University of Chicago would have the unmitigated Orwellian gall to publicly assert that Strauss and Bloom cared one whit about democracy, let alone comprehended the “ideals of democracy.”

Does anyone seriously believe that a pro-Israeli Chicago/Strauss/Bloom product such as Wolfowitz could care less about democracy in the United States let alone in Iraq? Or for that matter anyone in the Bush Jr. administration? After they stole the 2000 presidential election from the American People in Florida and before the Republican-controlled U.S. Supreme Court, some of whom were/are Feddies? Justice Clarence Thomas is a Straussian to boot. For eight years the Neo-Cons, Fundies, Feddies, and Con-Artists of the Bush Jr. administration did everything humanly possible to build an American Police State. So far University of Chicago Constitutional Law Teacher President Barack Obama has failed and refused to deconstruct and dismantle their totalitarian handiwork. To the contrary, the Obama administration has defended and justified in court almost every hideous atrocity that the Bush Jr. administration perpetrated on international law, human rights, civil rights, civil liberties, the U.S. Constitution, and the Bill of Rights.

At the behest of its Straussian Neo-Con Political Science Department, in 1979 the entire University of Chicago went out of its way to grant the “first Albert Pick Jr. Award for Outstanding Contributions to International Understanding” to Robert McNamara, who was personally responsible for exterminating 3 million Vietnamese and 58,000 men of my generation. In other words, the University of Chicago itself maliciously strove to rehabilitate one of the greatest international war criminals in the post-World War II era. History shall always record that the University of Chicago gratuitously honored Bob Half-an-Eichmann McNamara.

Walk out on Charles Murray
Oct 30 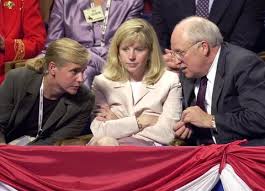