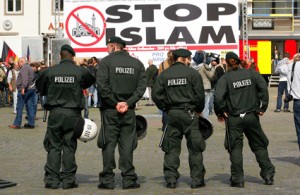 ‘Moslims in Europe, pack your bags and run. You are not safe anymore! Soon ethnic cleansing will begin, the displacement of millions of people which none would have thought possible years ago.’

This predicts American futurologist Gerald Celente in Dutch newspaper De Pers. According to Celente the hostility against Islam can no longer be put to a halt and will be boosted up by ‘populist, new-right wing oriented governments’. These governments will be using double law standards: one for the indigenous people, and one for immigrants.

Celente is a wel known source in the United States who is quoted repeatedly by media such as The Economist, The New York Times and The Wall Street Journal. Celente predicted among other things the fall of the Berlin Wall and the Credit Crunch.

Gerald Celente, director of the Trends Research Institute May 18, 2011
| |

[…] of the Berlin Wall and the Credit Cruch. He is now predicting a severe economic depression. In an interview with the Dutch “De Pers”, he predicts ethnic cleansing of Muslims in Europe as populist governments rise amidst the economic […]