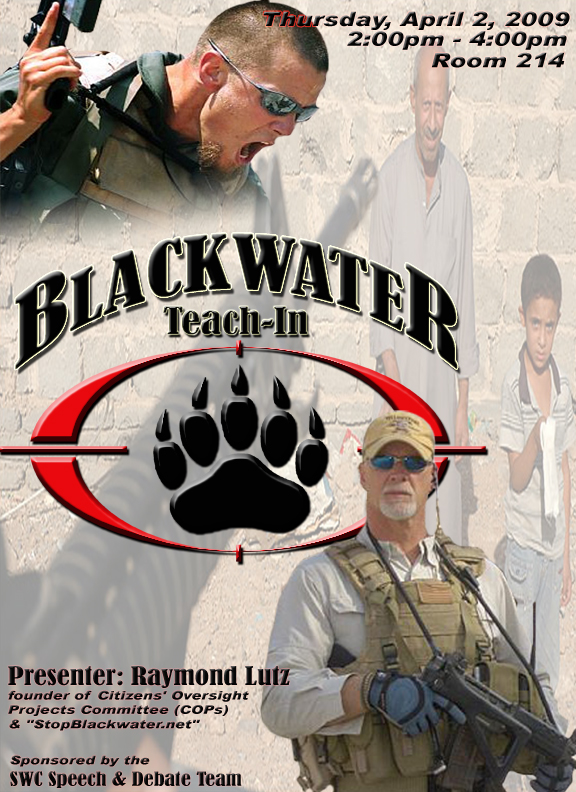 The Central Intelligence Agency has hired Xe Services, the private security firm formerly known as Blackwater Worldwide, to guard its facilities in Afghanistan and elsewhere, according to an industry source.

The previously undisclosed CIA contract is worth about $100 million, said the industry source, who spoke on condition of anonymity to discuss the deal, which is classified.

Two other security contractors, Triple Canopy and DynCorp International, put in losing bids for the CIA’s business, the source said.

The revelation comes only a day after members of a federal commission investigating war-zone contractors blasted the State Department for granting Blackwater with a new $120 million contract to guard U.S. consulates under construction in Afghanistan.

CIA spokesman Paul Gimigliano stopped short of confirming the contract, saying only that Xe personnel would not be involved in operations.

“While this agency does not, as a rule, comment on contractual relationships we may or may not have, we follow all applicable federal laws and regulations,” Gimigliano said.

The spokesman added, “We have a very careful process when it comes to procurement, and we take it seriously. We’ve also made it clear that personnel from Xe do not serve with CIA in any operational roles.”

Mark Corallo, a spokesman for Erik Prince, chairman of the board at Xe and owner of Prince Group — which owns Xe — said the firm would have no comment.

“Blackwater has undergone some serious changes," maintained a U.S. official who is familiar with the deal and spoke on condition of anonymity to discuss it freely.

"They’ve had to if they want to survive. They’ve had to prove to the government that they’re a responsible outfit. Having satisfied every legal requirement, they have the right to compete for contracts. They have people who do good work, at times in some very dangerous places. Nobody should forget that, either."

The Moyock, N.C.-based firm has been fighting off prosecutions and civil suits since a September 2007 incident in Baghdad, when its guards opened fire in a city square, allegedly killing 17 unarmed civilians and wounding 24.

In December a federal judge threw out charges against five of the alleged Blackwater shooters on procedural grounds, but the Justice Department is appealing the ruling.

Early this year German prosecutors launched a preliminary investigation into allegations that the CIA sent Blackwater operatives on an assassination mission against a suspected terrorist in Hamburg, Germany, in 2001.

In April, meanwhile, a federal grand jury indicted four of Prince's former top deputies, including his legal counsel, and a fifth employee, on 15 counts of conspiracy, weapons and obstruction-of-justice charges.

Prince personally has not been charged with any crimes.

Members of the federal Commission on Wartime Contracting hammered a State Department official during a hearing Monday, repeatedly asking how much weight was given to Blackwater’s record when the decision was made to give the firm a new contract last week.

Apparently weary of all the controversy, Prince announced two weeks ago he was putting the company on the block.

“A number of firms” are interested in buying the company, a spokeswoman said, declining to elaborate.

Meanwhile, on June 15, The Nation magazine reported that Prince was considering moving to the United Arab Emirates.

“If Prince's rumored future move is linked to concerns over possible indictment,” wrote Jeremy Scahill, author of a book on Blackwater, “the United Arab Emirates would be an interesting choice for a new home -- particularly because it does not have an extradition treaty with the United States.”

Prince's spokesman Corallo declined to discuss his client's plans, saying “his personal life is his own.”