A brief history of book burning in America 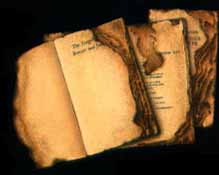 In the late 19th century, a former U.S. postal inspector Anthony Comstock appointed himself America’s censor, creating the New York Society for the Suppression of Vice. One of his primary targets was “obscenity” in literature along with birth control materials written by the likes of Margaret Sanger. In 1873, Comstock wielded enough political influence to get the U.S. Congress to pass the Comstock Law, making it illegal to transport and deliver “obscene, lewd, or lascivious” materials. Comstock claimed to have been responsible for burning 160 tons of “obscene” literature and causing the arrest of over 3000 perpetrators in his lifetime.

In 1935, the library trustees of Warsaw, Indiana ordered that all copies of Theodore Dreiser’s novels in their libraries be burned for its obscene and leftist content. As a boy, Dreiser went to school in Warsaw, Indiana.

In 1939 John Steinbeck’s landmark novel, “Grapes of Wrath”, about the tragic plight of migrant farm workers from the Oklahoma “dust bowl” were burned all over the country for both its political content and “vulgarity.”

In 1973, the Drake, North Dakota school board condemned Kurt Vonnegut’s novel, “Slaughterhouse Five”, as obscene, and had copies of the book burned in the high school furnace. The author then sent a letter to the head of the school board stating, “I am among those American writers whose books have been destroyed in the now famous furnace of your school. Certain members of your community have suggested that my work is evil. This is extraordinarily insulting to me. The news from Drake indicates to me that books and writers are very unreal to you people. I am writing this letter to let you know how real I am.”

And incidents of book burning continue into the 21st century. In 2001, J.K. Rowling’s Harry Potter children’s books were branded as “satanic” and burned in a bonfire at a church in Alamagordo, New Mexico. In 2003, Harry Potter books were also burned in a church bonfire in Greenville, Michigan. In both cases, the clergy stated that they had never read these books.

“A look back at “The Grapes of Wrath”, Cindy Mediavilla, #: http://www.californiastories.org/programs/grapes_censorship.htm)

Book Burning in the 21st Century

“On Sunday evening, members of the Harvest Assembly of God Church in Penn Township sing songs as they burn books, videos and CDs that they have judged offensive to their God.” – Published in the Butler Eagle, March 26, 2001. Courtesy of the  Butler Eagle.

Previous Article
The Hidden Tragedy of the CIA’s Experiments on Children
Next Article
Real America: The CEO of Target and Institutions of the Anti-Gay Christian Right

Real America: The CEO of Target and Institutions of the Anti-Gay Christian Right
Aug 11