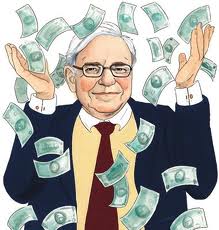 The richest man in the world doesn’t need $95 billion dollars.

But apparently, the companies he invests in did. According to a new report, companies in which Warren Buffett owns sizable minority stakes received a whopping $95 billion in Troubled Asset Relief funding, as Buffett was shilling for investments in common stocks.

To be fair, his holding company, Berkshire Hathaway, has received no government aid. In fact, Berkshire became a major lender in the wake of frozen US credit markets, injecting $5 billion into General Electric, Goldman Sachs and even motorcycle-maker Harley Davidson at hefty interest rates.

A bitter Reuters blogger, however, points out that Buffett’s investment holdings have benefited greatly from taxpayer’s largess. Aside from the nearly $100 billion in taxpayer aid extended to Buffett’s holdings — which include mortgage lender Wells Fargo and Bank of America, credit card leviathan American Express and the bonus-happy brokerage Goldman Sachs — his companies also benefit from $130 billion in FDIC backing for their debt.

“Were it not for government bailouts, for which Buffett lobbied hard,” writes Reuters’ Rolfe Winke, “many of his company’s stock holdings would have been wiped out.”

Buffett owns 27 percent of Berkshire Hathaway, for which he serves as chairman and chief executive for an annual salary of $100,000. He’s known for his frank and simple-worded investment advice, often laced with colorful sexual metaphors.

Winke says Goldman Sachs would have collapsed without government aid it received. The bank recently paid back its TARP funding — seen as an effort both to signal to the markets its financial strength as well as to get out from beneath a bevy of restrictions on company practices, including massive bonus payments to executives.

Without government backing, Winke notes, “banks that couldn’t finance their balance sheets would have sold toxic assets at market prices, and the losses would have wiped out their shareholder’s equity. With $7 billion at stake, Buffett is one of the biggest of these shareholders.”

“He even traded the bailout, seeking morally hazardous profits in preferred stock and warrants of Goldman and GE because he had “confidence in Congress to do the right thing” — to rescue shareholders in too-big-to-fail financials from the losses that were rightfully theirs to absorb,” the writer adds.

Winke notes that Buffett even complained about the favorable treatment given to his own investment holdings.

“Funders that have access to any sort of government guarantee — banks with FDIC-insured deposits, large entities with commercial paper now backed by the Federal Reserve, and others who are using imaginative methods (or lobbying skills) to come under the government’s umbrella — have money costs that are minimal,” Buffett wrote in his annual shareholder letter.

“Conversely,” he added, “highly-rated companies, such as Berkshire, are experiencing borrowing costs that … are at record levels. Moreover, funds are abundant for the government-guaranteed borrower but often scarce for others, no matter how creditworthy they may be.”

Remarks Winke, “It takes remarkable chutzpah to lobby for bailouts, make trades seeking to profit from them, and then complain that those doing so put you at a disadvantage.”

Buffett, though, is a strange egg in financial circles: he recently admitted paying just 19 percent in federal income tax, saying it was inappropriately low, and is a major proponent of the estate tax. He’s also the bete noire of some corporate executives, having been a major critic of executive salaries and stock options in years past.